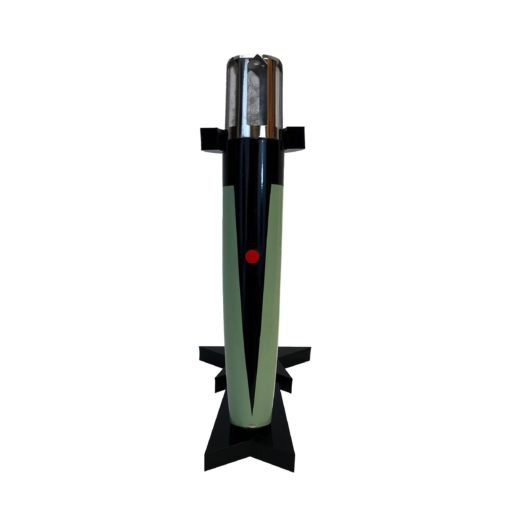 FREE Shipping to the UK
Earn 470 Points with this purchase!
Estimated Release: January 2022.

Details regarding the original prop, created in 1966, are sadly lost to time. So, to create this replica, the Factory Entertainment development team spent many hours carefully studying and examining images and footage of the prop to ensure the highest levels of accuracy.

The main body is crafted from aluminum, accented with metal and plastic fittings. A handsome display stand, designed to suggest the Science Patrol emblem and laser-cut from jet black acrylic, is also included and features the edition number of each replica on the underside.

Shin Hayata, a member of “Science Special Search Party (also known as the Science Patrol)”,was on a routine patrol in his Sub VTOL when he encountered a large blue globe-shaped UFO traveling at Mach 2. Unbeknown to Hayata, the blue UFO was in fact a Travelsphere carrying the monster Bemular. As Hayata moved to investigate, a second red Travelsphere appeared, and collided with Hayata’s aircraft. The red Travelsphere contained the Ultra Hero from Nebula M78, Ultraman, who was in pursuit of Bemular.

Both craft where critically damaged in the collision and Hayata was mortally wounded. To save the dying human Ultraman telepathically merged with him and bestowed the Beta Capsule upon him. This powerful device allowed Shin Hayata to transform into Ultraman.