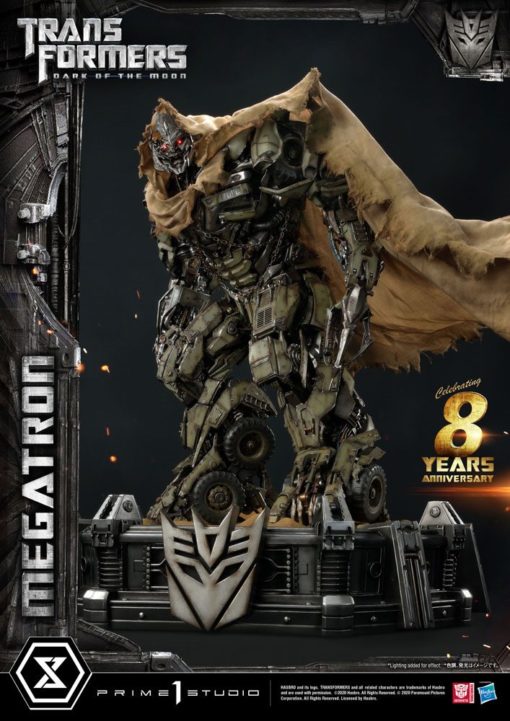 FREE Shipping to the UK
Earn 2,700 Points with this purchase!
Estimated Release: May 2022.

Prime 1 Studio is proud to present the long-awaited, highly anticipated, MMTFM-29 Megatron from the blockbuster Transformers: Dark of the Moon.

Prime 1 Studio is proud to present the long-awaited, highly anticipated, MMTFM-29 Megatron from the blockbuster Transformers: Dark of the Moon.

Directed in 2011 by Michael Bay, Transformers: Dark of the Moon smashed the box office in 2011 and is one of the highest-grossing Transformers films of all time. Dark of the Moon finds Megatron, leader of the Decepticons and the main antagonist of the Transformers series; three years after the events of Operation: Firestorm exiled in Africa. He is severely battle damaged and plotting on his new scheme.

We have captured the great Megatron in one of the most iconic poses in any Transformers film, inspired directly from the Africa scene. Shortly after an awesome transformation and scaring away the wildlife, Megatron rises, donning his cloak with such epicness that our jaws hit the ground. This masterpiece features that monumental pose and epic cloak, complete with battle scars and an LED illumination feature on Megatron’s eyes.

It doesn’t stop there! This statue also features swappable right-hand parts to display Megatron with or without his fusion shotgun, as well as three Lensmeter Decepticons to fully recreate the scene. Megatron stands 31 inches tall upon a powerful Decepticon themed base, complete with a detailed sand effect to fully bring the captivating feeling of this legendary scene to your collection!

We have taken the utmost attention-to-detail to bring you the best Megatron statue ever! In celebration of our 8-year anniversary, pair with the equally breathtaking MMTFM-28 Transformers: Revenge of the Fallen Optimus Prime to birth such a collection that Sentinel Prime himself would bow to. Needless to say, a must-have for Transformers fans everywhere and game-changing addition to your collection!!

Be the first to review “Transformers: Dark of the Moon Statue Megatron 79 cm” Cancel reply