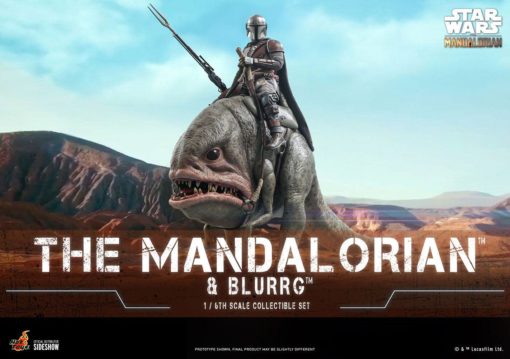 FREE Shipping to the UK
Earn 710 Points with this purchase!
Estimated Release: July 2022.

“You are a Mandalorian! Your ancestors rode the great Mythosaur. Surely you can ride this young foal.”

“You are a Mandalorian! Your ancestors rode the great Mythosaur. Surely you can ride this young foal.”

Returning to the beginning of The Mandalorian’s story, Star Wars witnessed the eponymous bounty hunter took on a mysterious bounty from a client to search for an asset on the desert planet of Arvala-7. Upon arrival, Mandalorian was assisted by Kuiil the Ugnaught and learned to ride the blurrg in order to reach the settlement seeking the valuable asset.

Fans were instantly captivated by the unfolding of the Mandalorian’s journey, and in celebration of Star Wars Day, Sideshow and Hot Toys is excited to present a special 1:6th scale collectible set featuring the Mandalorian in his original armor and the Blurrg!

The highly accurate Blurrg is skillfully developed based on the appearance of the creature in The Mandalorian. Standing at approximately 37 cm tall (43 cm with base) and 60 cm in length, it features a greatly detailed head and body, articulated arms, a saddle, and a rocky theme display stand!

This Mandalorian and Blurrg Sixth Scale Collectible Set will be an amazing piece for your special Star Wars collection!