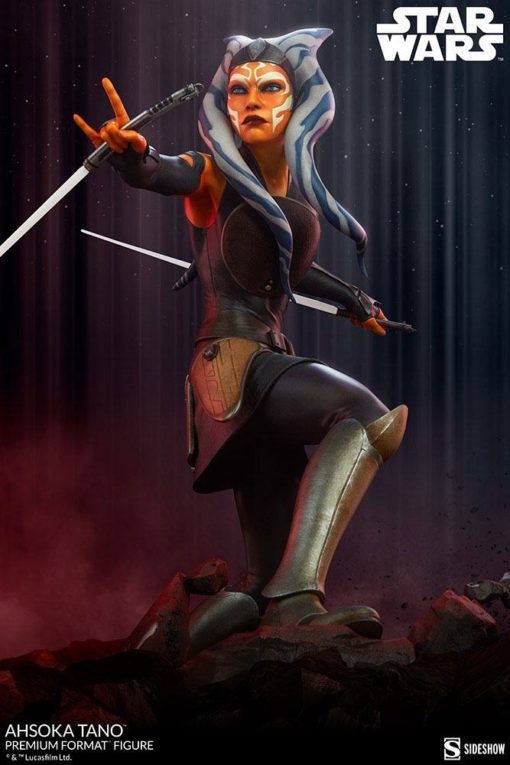 FREE Shipping to the UK
Earn 600 Points with this purchase!
Estimated Release: July 2022.

The Ahsoka Tano Premium Format Figure measures 19.5″ tall and 14″ wide as the Togruta warrior strikes a battle-ready stance on a Malachor-themed base, her iconic dual lightsabers at the ready. Surrounded by the crumbling structure of an ancient temple, Ahsoka steadies herself to use the Force and her former Jedi padawan training to confront the dangers of the dark side across the galaxy.

The polystone Ahsoka Tano Premium Format Figure is fully sculpted to capture the energy and action of her animated presence in a three-dimensional statue format. Ahsoka’s vibrant orange portrait bears her distinct white facial markings, and her face is framed by her white and blue patterned montrals and lekku. Her costume features a blue-grey bodysuit with sculpted skirts, belts, arm guards, shin guards, and detailed tan tassets at her hips. In her hands, her unique white-bladed sabers are unsheathed in anticipation of a fateful duel.

The Ahsoka Tano Premium Format Figure will become the fulcrum of any fan’s Star Wars collection- bring her home today!