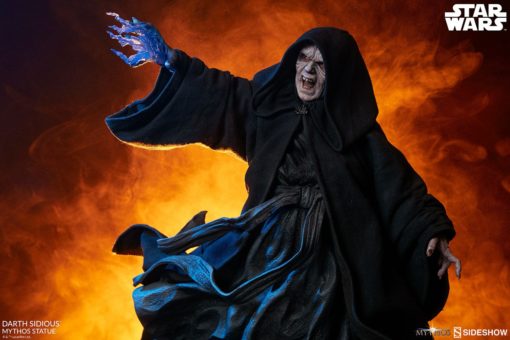 The Darth Sidious Mythos Statue measures 21″ tall, as the vengeful Sith levitates over the roiling lava of the volcano planet Mustafar. Drawing power from the dark side of the Force, Sidious shoots a blue bolt of lightning from his gnarled fingertips in a fearsome display of rage.

The polystone Darth Sidious Mythos Statue features PVC elements as well as a black fabric cloak over sculpted inner robes, designed to capture windswept motion as the villain hovers over the volcanic earth. The fabric cloak also has internal wiring, allowing you to pose it for added dynamism. Emperor Palpatine’s iconic portrait is detailed with sunken yellow eyes, darkened teeth, and a wrinkled, aged complexion, embodying the evil of the Dark Side. The Darth Sidious Mythos Statue also includes a swap-out left hand wielding an extended red Sith lightsaber blade with which to strike down the Jedi once and for all.

Show your Star Wars collection the true nature of the Force and bring home the Darth Sidious Mythos Statue today!