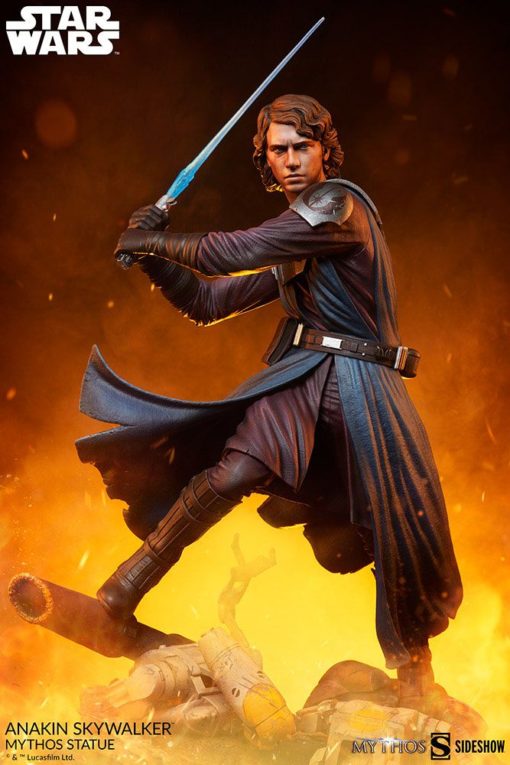 FREE Shipping to the UK
Earn 600 Points with this purchase!
Estimated Release: July 2022.

The Anakin Skywalker Mythos Statue measures 21″ tall as the Jedi Knight cuts through an infantry of B1 and B2 battle droids during the Clone Wars conflict. Wielding his blue lightsaber blade, Anakin is a fierce and often overconfident fighter, but is nonetheless a peacekeeper aligned with the noble goals of the Jedi Order.

The polystone Anakin Skywalker Mythos Statue features a fully sculpted blue and purple Jedi tabard with silver armor pieces based on his appearance during the Clone Wars. Painted with dynamic highlights and shadows, this energetic Star Wars statue is designed with realistic motion and textures throughout his costume and weathered chest plate and pauldrons. The statue also includes two swappable portraits of the Jedi Knight: a scarred, heroic portrait with blue eyes and wavy brunet hair, and an alternate head featuring slightly messier hair and the yellowed eyes of the Sith, representing Anakin’s eventual fall to the dark side of the Force. Tell the tragic story of the Chosen One with this all-encompassing Star Wars collectible.