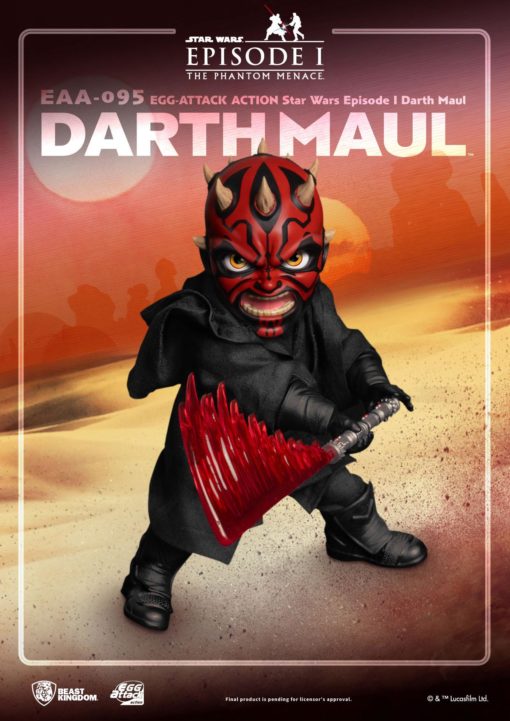 FREE Shipping to the UK
Earn 115 Points with this purchase!
Estimated Release: February 2022.

Arguably one of the scariest, most fierce Sith warriors to ever take on the Jedi, Darth Maul is a tattooed apprentice to Darth Sidious, with a haunting looking face, including R…

Arguably one of the scariest, most fierce Sith warriors to ever take on the Jedi, Darth Maul is a tattooed apprentice to Darth Sidious, with a haunting looking face, including Red skin and horns. An extremely skilled fighter, with a signature red, double edged lightsaber, he was introduced in Episode 1 as the ultimate force to be reckoned with!

The EAA series of 6-inch, highly articulable action figures, under Beast Kingdom’s ‘Entertainment Experience Brand’ is taking on the Dark Lord of the Sith himself, with the Darth Maul EAA-095. Using real fabric for the costume and cape, as well as a strong focus on details, the Sith Lord is ready to battle the Jedi with an included double-edged, red lightsaber with its own set of effects. The included telescope brings back memories of the vast deserts where we see Darth Maul tracking his Jedi prey.
The included set of replaceable face sculpts also gives collectors different choices to animate the figures’ face, especially for those looking to recreate his famous roar in the heat of battle!
So for fans of the evil looking Sith, this set is one not to be missed!

It stands approx. 16 cm tall and comes in a printed window box.