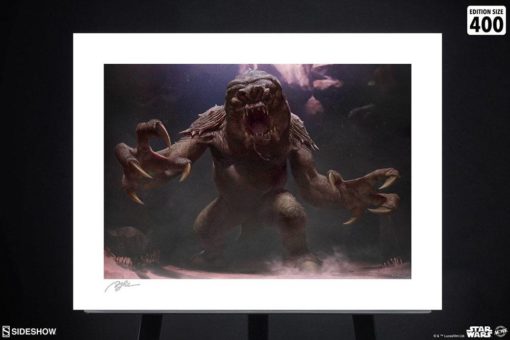 FREE Shipping to the UK
Earn 130 Points with this purchase!
Estimated Release: August 2021.

Dive into the pit beneath Jabba the Hutt’s palace as The Rancor™ Fine Art Print puts you face to fangs with this terrifying and beloved Star Wars beast. Known for his incredible creature illustrations and concept work, artist RJ Palmer captures the frightening stature and ferocity of the Rancor as it approaches the viewer with claws outstretched. The creature is covered in detailed scars, muscles, and spines, giving fans a new perspective of its iconic onscreen appearance. Dangling saliva and the dust clouding at its feet give the composition a sense of urgent movement- only the most skilled Jedi could survive this deadly encounter.

Limited to an edition of 400 pieces, The Rancor™ Fine Art Print features an authorized, automated artist signature and includes a Certificate of Authenticity. Based on The Rancor™ Deluxe Statue by Sideshow, this high-end collectible art piece makes a perfect companion to the fully realized textures and colors of the immense three-dimensional sculpt. Pair the print and the statue for a Star Wars palace display that even Jabba would be jealous of!