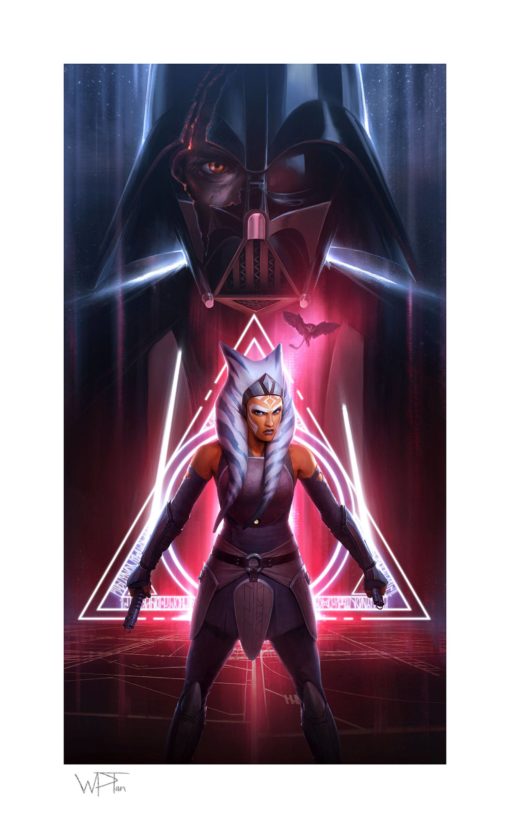 Past and present collide in this dramatic composition, which captures the fateful encounter on Malachor between the former master and his padawan, both forever changed by their separation from the Jedi order. Between worlds, Ahsoka Tano acts as the fulcrum for agents of the Rebellion while they make a valiant stand against Darth Vader and the might of the Galactic Empire. This Star Wars artwork shows a grown Ahsoka standing in the Sith temple while her convor companion Morai observes from a distance. Behind the Togruta looms the shadow of Vader, his helmet slashed to reveal a hint of the man Ahsoka once knew- Anakin Skywalker.

Each Ahsoka Tano: Between Worlds Fine Art Print features an authorized, automated artist signature and includes a Certificate of Authenticity as a part of the limited edition of 1000 pieces. Inspired by the Ahsoka Tano Premium Format™ Figure by Sideshow, this Star Wars art print makes a perfect companion to the highly detailed three-dimensional sculpt and is a must-have in any fan’s collection.

Fight for the galaxy’s future and bring home the Ahsoka Tano: Between Worlds Fine Art Print by Darren Tan today!

– Officially licensed by Lucasfilm in partnership with ACME Archives
– Limited edition of 1000
– 16 x 26″ fine art giclée print
– An authorized, automated penciled signature
– Certificate of authenticity
– *Print is wrapped and hand-rolled in acid free paper, inserted in a protective plastic sleeve, and shipped in a 4″ diameter tube*