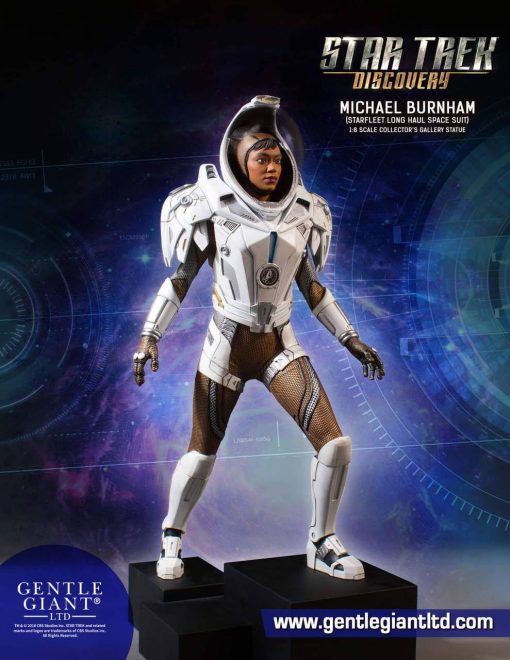 Commander Michael Burnham was born in 2226 to human parents that were killed by Klingons. She was raised by the Vulcan ambassador, Sarek, and his human wife on Vulcan, where she…

Commander Michael Burnham was born in 2226 to human parents that were killed by Klingons. She was raised by the Vulcan ambassador, Sarek, and his human wife on Vulcan, where she studied at the Vulcan Science Academy. All her life, she felt the pressure to prove herself to her father and to be more Vulcan, however her mother often counseled her to not lose touch with her humanity.

The Shenzhou encountered a strange object in space that their sensors could not scan. Burnham was determined to find out the object’s origin, so she devices a plan, dawns a Starfleet long-haul space suit and goes out into deep space to lay eyes on whatever it was that destroyed their probe. What she finds in the darkness of deep space catches her completely off guard and changes the course of her life.

Gentle Giant’s artists worked directly with production to obtain original concept models, reference photos and authentic production files to accurately match and recreate the costume worn by actor Sonequa Martin-Green for our first Star Trek: Discovery Collector’s Gallery 1:8th scale statue. The detail in this piece has to be seen to be believed and looks stunning from every angle. Every detail of the costume has been captured from the insignia shaped mesh, to the clear visor, to the jets, vents and scribe-lines of the suit. You can display her alone or have her facing off against our in-scale Klingon Torchbearer statue (also available for pre-order). This limited edition statue of First Officer Michael Burnham in her Starfleet long-haul space suit is hand-cast, hand-painted and hand-numbered with a limited edition Certificate of Authenticity.