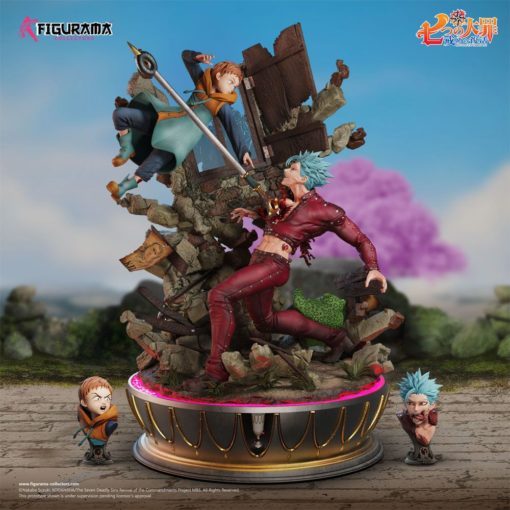 FREE Shipping to the UK
Earn 1,120 Points with this purchase!
Estimated Release: March 2022.

Ban vs. King Elite Fandom Statue is the world’s first Seven Deadly Sins polystone portraying two characters in combat. Four portraits convey the emotional intensity of the fight, with King showing either vengeful rage or cold indifference toward Ban, who returns a cocky or dangerous expression as he licks blood from his canines. Bust stands bearing the symbols of the Fox’s Sin of Greed and the Grizzly’s Sin of Sloth allow the alternate portraits to be displayed attractively alongside the main piece.
Fueled by revenge, Fairy “King” Harlequin hovers weightlessly in mid-air, driving his Spirit Spear Chastiefol straight through Ban’s chest. The gaping wound and glistening splash of blood cannot stop Undead Ban, who flexes his left hand to steal King’s power with his Snatch ability or swing his swappable three-section staff in retaliation.

Beneath their feet, a replica of the Fountain of Youth’s chalice represents the foundation of their deadly conflict. The purple liquid illuminates the battle above with gorgeous LED, highlighting the medieval aesthetic of Britannia. Intricately shattered glass, variegated brick walls, creeping vines, woven textiles, splintering wood, and careening rubble showcase the anime’s Gothic and Corinthian-inspired architecture amidst the chaos of the fight. References hidden around the statue create a 360-degree viewing experience, including two tattered wanted posters and Chastiefol’s plush Guardian form. Two critical Easter Eggs lend emotional weight to the scene: The helmet gifted to King by his deceased friend, Helbram, and the final Almoca Seed entrusted to Ban by Elaine.