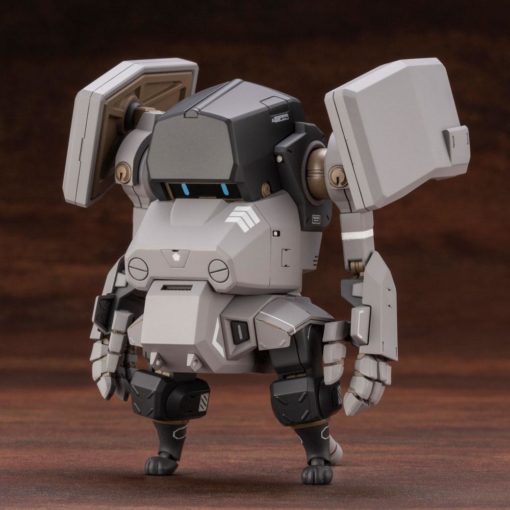 FREE Shipping to the UK
Earn 50 Points with this purchase!
Estimated Release: December 2021.

A 100mm model with high-spec articulated features! Kotobukiya presents a 1/35 scale plastic model kit of the original character “Nacchin,” popular for its unique design! This gr…

A 100mm model with high-spec articulated features! Kotobukiya presents a 1/35 scale plastic model kit of the original character “Nacchin,” popular for its unique design! This gray version of Nacchin is perfect for customizations using M.S.G.

“JGSDF Type 07-? Tank Nacchin” is an original character created by the robot designer Moi, who is active on social media. This original gray color scheme was designed especially for this plastic model kit!

– The model was made using CAD data specially created by the original designer Moi for the purpose of this kit.
– This high-spec full-action model has 62 points of articulation.
– The model has a variety of articulation features, including those utilizing pop-out joints for the shoulders and knees and sliding joints for the thighs.
– The model’s gray color scheme is designed to match the default dark gray color of M.S.G (Modeling Support Goods). By utilizing the 18 3mm connection points, the model can be easily and naturally customized into your own unique design.
– The runners for the kit are made in five different colors, making it easy to assemble the model in its original color scheme with no painting required.
– This kit comes with a special WEAPON UNIT05 BATTLE AXE & LONG RIFLE (discontinued) in the Nacchin color scheme. Nacchin can hold the weapon by using the included weapon holding hands.
– This model was designed with future customizations in mind, and the hatch on the head can be opened and closed like the original Nacchin.
*The cockpit seat and pilot are not recreated on this model.
– The “tail” part is made of flexible wire that can be posed.
– The “Eye Panel Part (Looking Forward)” is pre-painted with blue eyes on a black background.
– The kit includes three additional blank eye panel parts which can be affixed with the included decals to create a variety of expressions.
– The kit includes two “Universal Grip Parts” equipped with 3mm joints. These parts can be used with a wide range of parts, including M.S.G.
– The point for 3mm connection joints on the bottom of the model is compatible with the included Nacchin base or the separately sold New Flying Base.
– The kit includes a light gray head cover as a bonus part. Users can choose to build Nacchin in a color scheme similar to the original character.