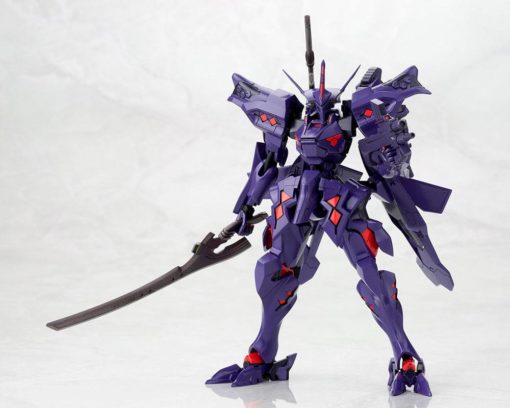 FREE Shipping to the UK
Earn 40 Points with this purchase!
Estimated Release: December 2021.

From the popular game Muv-Luv Alternative, the Type-00 Tactical Surface Fighter of the Empire of Japan, TAKEMIKADUCHI TYPE-00R, joins Kotobukiya’s model kit series in a 1/144 sc…

From the popular game Muv-Luv Alternative, the Type-00 Tactical Surface Fighter of the Empire of Japan, TAKEMIKADUCHI TYPE-00R, joins Kotobukiya’s model kit series in a 1/144 scale!

A special TSF made only for the shogun’s exclusive use, the purple coloring of the body is recreated within the model’s color scheme.

With the eyes and the lit areas being recreated with clear parts, users can recreate a finish that is close to TAKEMIKADUCHI TYPE-00R by just assembling the model.

Also, the compact scale of this model allows for a fewer number of parts and lower pricing, which makes it easier for beginner plastic model builders to also enjoy this model kit.

Using the popular NON-scale design for each part, best proportions and the dynamic aspect of TAKEMIKADUCHI TYPE-00R were recreated.

The “Type-74 PB Blade”, “Type-87 Assault Cannon”, and the “Blade Mount” and “Gun Mount” equipped on its shoulders are also included to create a complete model kit.

This model is compatible with the various Flying Bases for users to recreate a variety of dynamic poses.