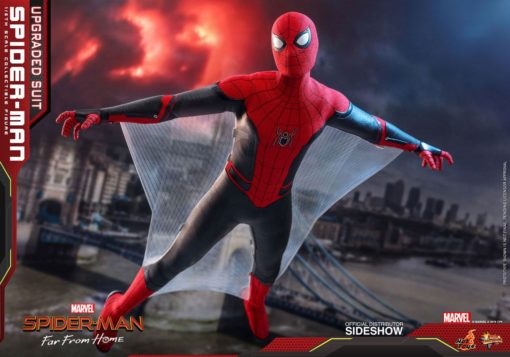 FREE Shipping to the UK
Earn 269 Points with this purchase!
Estimated Release: August 2021.

In Spider-Man: Far From Home, Peter Parker plans to leave super heroics behind for a few weeks with his friends for a vacation in Europe, but several creature attacks are plagui…

In Spider-Man: Far From Home, Peter Parker plans to leave super heroics behind for a few weeks with his friends for a vacation in Europe, but several creature attacks are plaguing the continent. Nick Fury will have to call out our friendly neighborhood Spidey for his assistance!

Fans are excited for brand new Spider-Man suits with alternative appearances! Sideshow and Hot Toys are ecstatic to bring you Spider-Man and his Upgraded Suit figure based on Spider-Man: Far From Home in sixth scale!

What’s more, an additional accessory for this Spider-Man figure will be arriving soon! Stay tuned for a special surprise!

This Spider-Man in his newly developed Upgraded Suit will surely make a great addition to your favorite wall-crawler display!