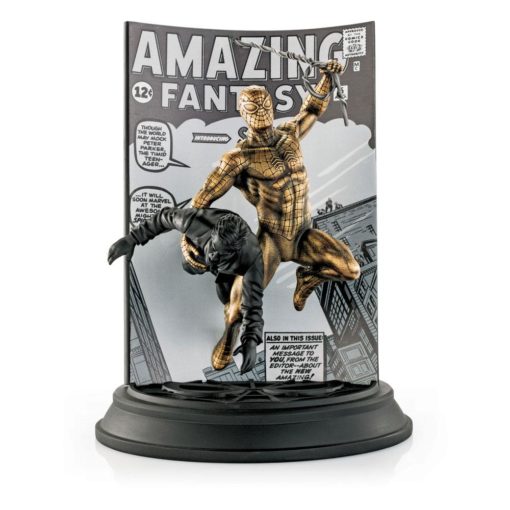 Earn 1,530 Points with this purchase!

In 1962, Amazing Fantasy #15 introduces Spider-Man, one of Marvel’s most popular characters, to the public for the first time, with Steve Ditko and Jack Kirby’s action-packed co…

In 1962, Amazing Fantasy #15 introduces Spider-Man, one of Marvel’s most popular characters, to the public for the first time, with Steve Ditko and Jack Kirby’s action-packed cover art a clear advertisement of Peter Parker’s superpowers.

Illustrator Alan Quah and sculptor Mufizal Mokhtar’s thrilling interpretation sees Spider-Man, cast in pewter and gilded in 24K gold, leap from the cover, the bonded porcelain figure of a terrified mobster firmly in his grasp.

In 2011, the landmark issue, which tells the webslinger’s origin story, becomes the second comic book to cross the US$1 million threshold at auction.