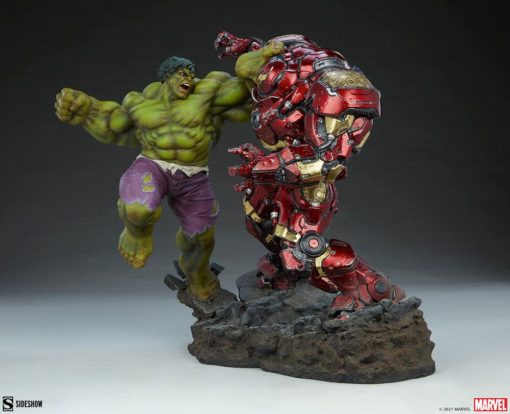 FREE Shipping to the UK
Earn 1,200 Points with this purchase!
Estimated Release: January 2022.

Sideshow presents the Hulk vs Hulkbuster Maquette, an action-packed Marvel collectible that pits two Avengers against one another in your collection.

Tony Stark is a futurist, always thinking ahead- even to the day he might have to battle a friend! This dynamic super hero showdown deploys Iron Man’s iconic Hulkbuster armor against the Hulk in a fight to the finish. Dr. Banner’s brawling alter ego grips the armored suit and prepares to punch his way through the problem at any cost.

The Hulk vs Hulkbuster Maquette measures 19.5″ tall and 21.6″ wide, standing on top of a rubble-themed base. This polystone Marvel statue features two fully sculpted figures interlocked in an epic battle. Marvel’s Jade Giant, the Hulk, is incredibly muscled and detailed with sculpted purple pants, realistic textures and colors throughout his irradiated complexion, and a roaring portrait as he winds up his next hit. The Hulkbuster is a meticulous recreation of Tony Stark’s signature tech, with intricate defense paneling, weathered effects, and a light up feature in the eyes, arc reactor, and hand repulsors. Activate the armor in your collection with the included power cord and add another level of realism to this smashing scene!

Pick a side and join the fight when you bring home the Hulk vs Hulkbuster Maquette for your universe of Marvel collectibles.