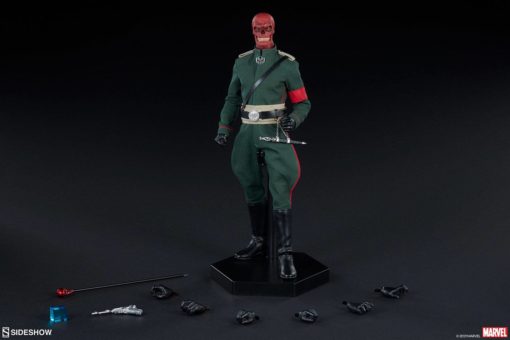 FREE Shipping to the UK
Earn 250 Points with this purchase!
Estimated Release: October 2021.

As the figurehead of HYDRA and the archenemy of Captain America, the Red Skull Sixth Scale Figure takes on a nefarious new look as a part of Sideshow’s Marvel Sixth Scale collection. This figure features a detailed skeletal portrait and carefully tailored fabric costume inspired by his appearance in Marvel Comics.

The ruthless Red Skull Sixth Scale Figure includes a green bodysuit with red trim, a HYDRA medallion, and a red HYDRA armband. Around his waist, he wears a green fabric belt and a black leather-like officer’s belt, emblazoned with the evil insignia. Red Skull also has a pair of black officer’s boots and four pairs of black gloved hands, including fists, open hands, pistol grip hands, and alternate grip hands, giving you a wide variety of display options for this figure in any collection.

To aid in his evil conquest of the Marvel Universe, the Red Skull Sixth Scale Figure’s accessories include a HYDRA officer’s knife and pistol, a skull-topped cane, and the Cosmic Cube. Unleash the full menace of Johann Schmidt on your Marvel collection with any number of villainous poses for this articulated figure.

All enemies of HYDRA will fall. Conquer your collection with the Red Skull Sixth Scale Figure today!