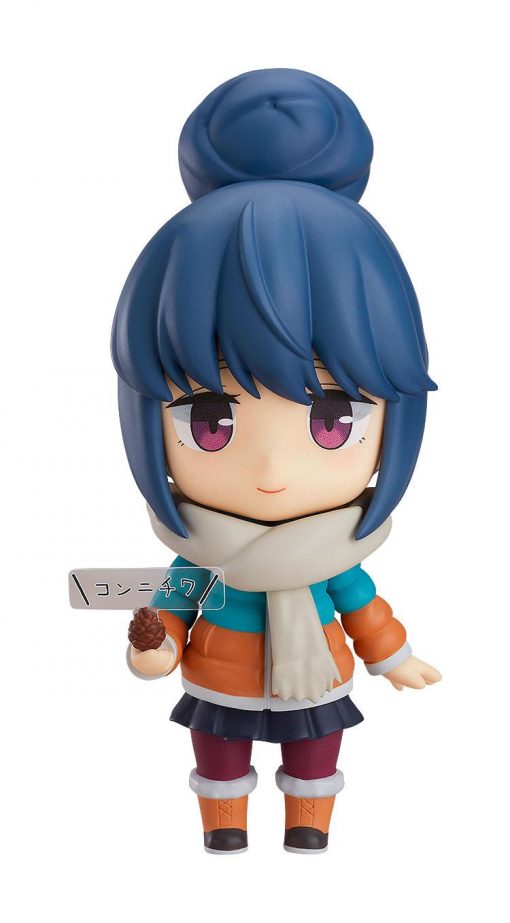 FREE Shipping to the UK
Earn 71 Points with this purchase!
Estimated Release: November 2021.

From the popular anime series, “Laid-Back Camp” comes a Nendoroid of Rin Shima in a DX version with loads of camping equipment parts! She comes with three face plates including …

From the popular anime series, “Laid-Back Camp” comes a Nendoroid of Rin Shima in a DX version with loads of camping equipment parts! She comes with three face plates including a cool standard expression, a smiling expression, as well as a displeased expression, holding no emotions back! She also comes with a detachable scarf, along with a bun hair part to display when her hat is off.

She comes with several optional parts including a pot, camp stove, fork, the soup-style pasta she made in the show and a cell phone. Additionally, a low chair, low table, book, campfire, tent, pinecone, and metal box grill are also included! Phrase plates that say “Hello!” and “Hot!” are also included to attach to the pinecone, so you can recreate your favorite moments from the show!

In addition, the Nendoroid also comes with a social media text plate to recreate the iconic timelines from the series, as well as a paper scooter! Not only can you enjoy that camp feeling from your own home, but there’s even more fun to be had by taking her with you on your own camping trips!

The Nendoroid-style figure stands approx. 10 cm tall and comes with base and figure stand.

The figma (フィグマ) series is a Japanese action figure line produced by Max Factory and distributed by Good Smile Company. The product series is developed by the CEO of Max Factory, MAX Watanabe, as well as Masaki Apsy, and focuses on creating highly articulated hand-sized figures with a focus on popular anime characters. Each figma is sold with various accessories such as exchangeable faces, hands and other optional parts. Occasionally figma figures are based on other subjects such as characters from the Japanese voice synthesizing software, Vocaloid, the well-known Touhou game series and other popular Nintendo game series such as The Legend of Zelda and theMetroid series. There have also been a few figma figures based on real people, such as a figma of Michael Jackson from his “Thriller” music video.