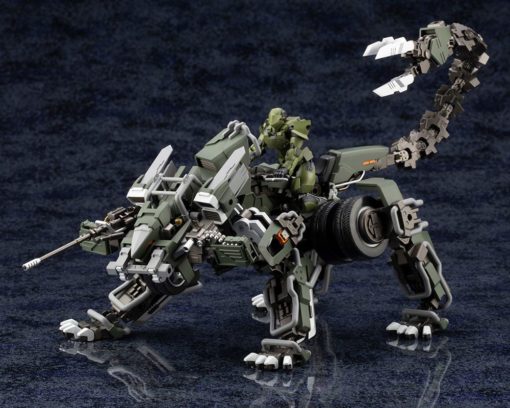 FREE Shipping to the UK
Earn 100 Points with this purchase!
Estimated Release: October 2021.

– The included GOVERNOR ARMOR TYPE: PAWN A1 is of the Ver. 1.5 model specifications and uses the same military color scheme as EARLY GOVERNOR Vol.1 JUNGLE TYPE.
– The color scheme of Lord Impulse’s armor has been changed to the same military dark green that is used with other Hexa Gear.
– The unit’s distinctive “Trick Blade” tail is flexible and can be posed to give the mech an animalistic appearance. The blades on the tip can be opened and closed to hold small weapons. The number of joints can also be increased by using the included Trick Blade extension joints. The Trick Blade’s joints are connected with 3mm connectors, allowing users to freely attach multiple additional parts.
– The number of joints on a standard Trick Blade has only 8 joints, but this kit includes 16 joints to allow more customization options for users to enjoy.
– The mouth parts, known as “Hound Bite,” can be opened and closed, allowing it to be displayed with alternative parts or weapons such as Weapon Unit 06 Samurai Sword (sold separately).
– The magazines for the chain gun and automatic grenade launcher can be removed and attached to Rayblade Impulse (sold separately).
– The “strike edges” attached to the back of the front feet have a two-tiered expansion and contraction gimmick, allowing the blade parts to be displayed stowed or in use.
– The chain gun can be equipped with the included parts to be used as a weapon for Governor models.
– The joints for the hips and the back feet use updated parts, giving the model more flexibility than its predecessor, Rayblade Impulse. The new parts are also compatible with Rayblade Impulse (separately sold).
– The model can be converted between the combat-based Zoatex Mode and the mobility-based Vehicle Mode.