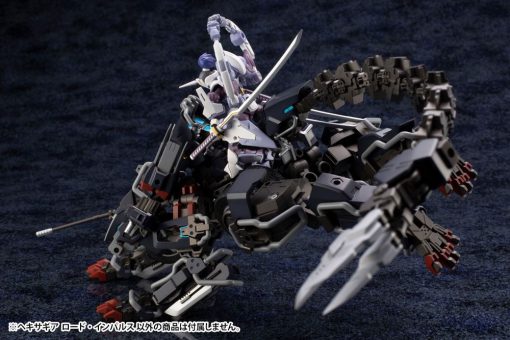 Lord Impulse is a third generation Hexa Gear developed by Earthcline Biomechanics. A high-grade mass produced machine that is the predecessor to Rayblade Impulse, the majority o…

Lord Impulse is a third generation Hexa Gear developed by Earthcline Biomechanics. A high-grade mass produced machine that is the predecessor to Rayblade Impulse, the majority of Lord Impulse’s frame and parts are the same as the newer, more specialized model. Nonetheless, Lord Impulse remains an outstanding, universally adaptable machine.Earthcline Biomechanics was originally developing Voltrex and Lord Impulse together, but after SANAT’s seizure of MSG, the factory producing Voltrex was seized. Combined with the establishment of the Liberty Alliance and the transition to the production of battle oriented Hexa Gear, the focus of the supply planning shifted to Lord Impulse instead. Due to the change from two machines to one, Lord Impulse was adjusted to account for some of its shortcomings, including the addition of magazines for a chain gun and automatic grenade launcher as well as the trick blade. Despite the additions, it is widely acknowledged that Lord Impulse is lacking in firepower, and due to this there are many cases in which additional weapons are added as the user sees fit. In response to these customizations, an order was released for users to avoid overly powerful weapons that would be a hindrance to using the Hexa Gear in groups as well as those deemed unfit for use with a third generation Hexa Gear model.The mobile thrusters installed on either side of the front of the machine are not intended for acceleration, but rather as instant attitude control when the machine jumps.The “trick blade” that extends from the back of the machine is a multi-jointed mechanical arm. The tip of the arm is equipped with a moveable claws that can be used to grab enemies. This weapon can be used as a fifth arm in close quarters combat, and can also be used to tear enemy Governors from machines when passing by at high speed. The arm can also hold and use firearms or melee weapons. The combination of the trick blade’s sturdy construction and its Zoatex control system make the weapon both resilient and swift, and its range of utility far surpasses Voltrex’s tail blade. The weight of the weapon leads to an increase in the machine’s overall weight and a decrease in its mobility. Due to the increased size of Rayblade Impulse, the weapon was deemed unnecessary for standard use in the derivative model.Model Specifications:- The unit’s distinctive “trick blade” tail is flexible, and can be posed to give the mech an animalistic appearance. The blades on the tip can be opened and closed to hold small weapons. The weapon’s joints are connected with 3mm connectors, allowing you to attach as many additional parts as you want.- The mouth parts, known as “hound bite,” can open and close, allowing it to be displayed with alternative parts or weapons, such as Weapon Unit 06, Samurai Sword (sold separately).- The magazines for the chain gun and automatic grenade launcher can be removed and attached to the Rayblade Impulse model (sold separately).- The “strike edges” attached to the back of the front feet have a two-tiered expansion and contraction gimmick, allowing them to be displayed stowed or in use. The blades are also equipped with 3mm joints, making them compatible with Frame Arms and other model kits.- The chain gun can be equipped with the included parts to be used as a weapon for Governor models. The parts are adjustable allowing it to be displayed at a variety of angles.- The joint for the hips and the back feet use updated parts, giving the model more flexibility than the previously released Rayblade Impulse model. The new parts are also compatible with separately sold Rayblade Impulse model kits.- The model can be converted between the combat-based Zoatex Mode or the mobility-based Vehicle Mode.Included Items:- Lord Impulse main body x1- Chain gun expansion parts x1- 3mm joints x4- Archive Card x1