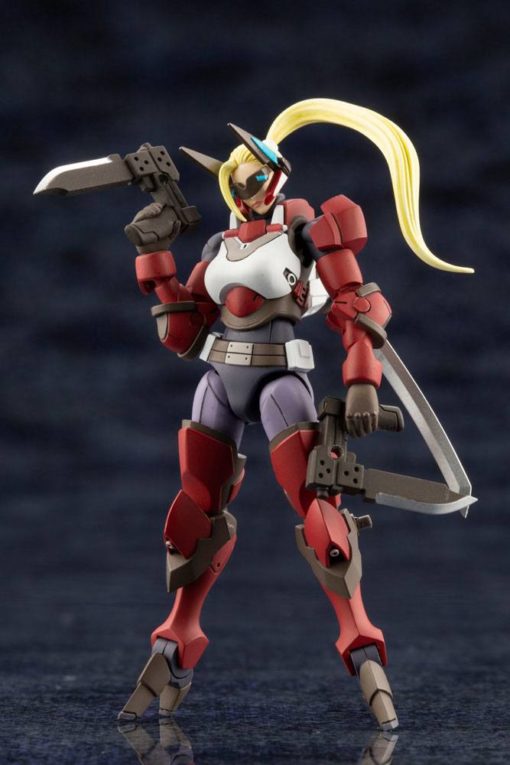 FREE Shipping to the UK
Earn 32 Points with this purchase!

– GOVERNOR LIGHT ARMOR TYPE: ROSE, one of the first Governor models in the Hexa Gear series, is back in Ver. 1.5 which comes with a newly revamped head part and updated materials.
– Update 1: The head part now looks more realistic than the previous model; this model’s head is based on Early Governor Vol. 3. Accessories for the head have also been newly sculpted, and now also includes a fully enclosed combat helmet. A total of four different head designs can be assembled.
– Update 2: The head and upper body armor, which were previously made with PVC material, have been changed to PS material, making it easier to paint and modify. (The wrists will continue to be made of PVC.)
– Update 3: The weapon holding hand has been modified to make it easier to display weapons included in other Governor models.
– Update 4: Due to the change of materials used, some part designs and molds have been updated or newly made.
– The armor design of the collar part has been modified to be larger and more open compared to the previous model so as not to interfere with the range of motion of the neck.
– The shape of the “Lightweight Blade” and “Gun Knife” has been modified to fit the newly sculpted Weapon Holding Hand. *There is no change to the weapons connected to the hand parts.

– The model is equipped with a connector on the back piece, which allows you to attach a “HEXA G-R.A.M System” and a variety of parts.