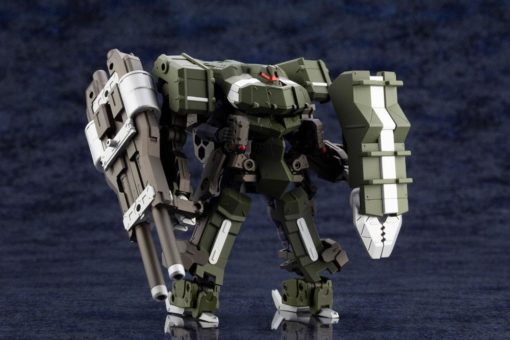 – This is a variation model kit of AERIAL FIGHTER WOODPECKER that includes multiple newly designed parts. Utilize the hexagonal holes and 3mm joints included on each part to exchange parts and expand this model.
*This model kit cannot make an AERIAL FIGHTER WOODPECKER model.
– This model kit includes a newly sculpted head, arms, legs, weapons, and back booster parts.
Users can select between “Standard Mode” and “Commander Mode” through interchanging the head parts.
The shoulders, elbows, and wrists in the arms can be moved. Weapons can also be attached directly to the wrists.
The hip joints, knees, ankles, and toes in the legs can be moved. These parts can be moved in the same angles as the mounted Governor.
– The cockpit can be opened and closed to set a GOVERNOR WARMAGE HETZER (Special Head Ver.) inside. The sensor inside of the cockpit can also be opened and closed, enabling the Governor inside to peak outside of the cockpit.
– The main weapon “Binary Howl” can be broken down and equipped separately on each hand and the back.
– This model can be attached to various Flying Bases (sold separately) to enjoy countless action poses.
– The color of the Blazeboar base model uses the same dark green coloration as the previously released BULKARM a JUNGLE TYPE and gunmetal coloration as the HEXA GEAR series.