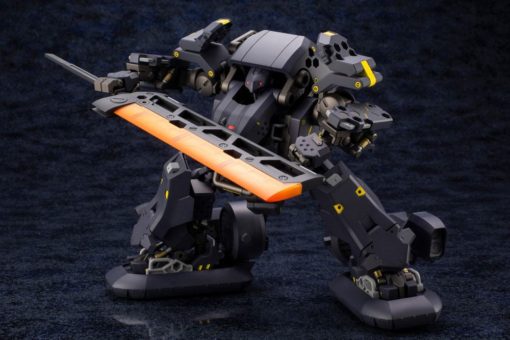 Bulkarm ß (Beta) was the next 2nd generation Hexa Gear to be developed by MSG after Bulkarm a (Alpha). Similar to Bulkarm Alpha, there is a wide range of variant Beta models in …

Bulkarm ß (Beta) was the next 2nd generation Hexa Gear to be developed by MSG after Bulkarm a (Alpha). Similar to Bulkarm Alpha, there is a wide range of variant Beta models in use, and these units are often spotted on the battlefield.

The model’s design is extremely similar to the Alpha unit, and the primary visual difference is the legs. The Beta unit was outfitted with support devices on the legs for mobility purposes, giving the unit a comparatively high movement speed. The reason for this improvement is the slow movement speed of the Alpha unit, which was sacrificed at the cost of the unit’s durable but extremely heavy armor. Like the Alpha unit, the Beta unit features the Iron Fist operators that favor strength, but the flexibility of the wrist joints has been improved, allowing the operators to be equipped with a wider range of weapons. This feature allows the model to be customized with a variety of weapons, from long-range cannons to close-combat gear, but most customizations utilize smaller weapons such as machine guns and knives in order to avoid hindering the unit’s improved mobility.

Lumberjack:
Lumberjack is a variant model of Bulkarm beta. Built solely with parts from MSG, it is clear that the model was designed for the purpose of disassembling target units. The unit wields a massive weapon known as “Slugger Blade.” The weapon’s blade is made out of a mysterious substance known as ???. The properties of this new material allow the weapon to reach a high temperature instantaneously. The weapon can only be utilized with the power of a HEXA G-R.A.M., but is extremely useful for destroying larger facilities.

The sensor unit on the model’s head makes it more suited to close combat brawls than firefights.