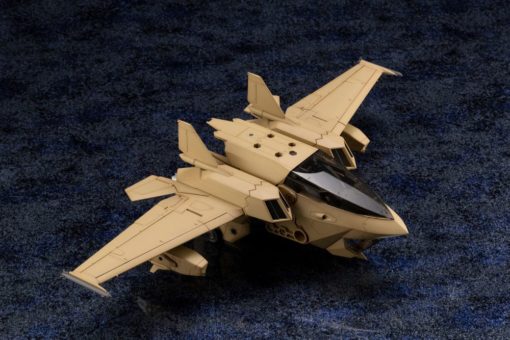 – Based on a jet pod that a Governor rides in, the internal block can also be used separately as an air glider.
– The canopy part is made of smokey clear-colored plastic and by sliding the front part and opening the top, a separately sold Governor unit can be placed inside.
– The flaps and slats on the main wings can be moved to simulate landings and takeoffs.
– Each unit can be taken apart and attached to various Hexa Gear using the “HEXA G-R.A.M System.”
– The canopy unit can be attached to the separately sold BULKARM a, BULKARM a JUNGLE TYPE and BULKARM ß STANDARD TYPE.
*This unit is attached through the hexagonal attachment point on the cockpit’s armor, so it cannot be attached to BULKARMß “LUMBERJACK.”
– The smokey clear parts such as the canopy also come in the armor’s coloring so users can decide which one to use when assembling.