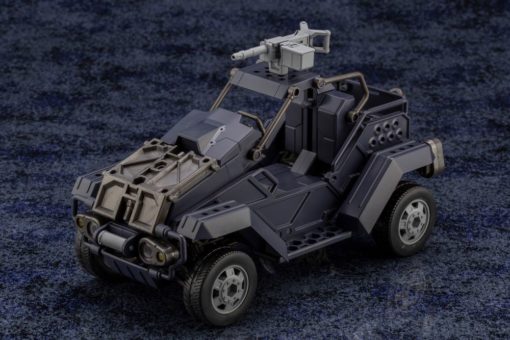 FREE Shipping to the UK
Earn 50 Points with this purchase!
Estimated Release: November 2021.

The third booster pack to be released in the Hexa Gear series. This kit includes parts to build a universal four-wheeled vehicle and is the first 1st Generation Hexa Gear to joi…

The third booster pack to be released in the Hexa Gear series. This kit includes parts to build a universal four-wheeled vehicle and is the first 1st Generation Hexa Gear to join the lineup.

The model was designed based on user requests, with multiple hexagonal holes on the model’s frame for customization.
The model’s chassis and body can also be disassembled and used as customization parts for other Hexa Gear kits.

– The model and armor parts are of a black coloration similar to LORD IMPULSE and BULKARMß “LUMBERJACK” making it easy to customize with other model kits without painting.
– The connector part that allows users to attach Governor models to the unit is equipped with a slide joint that allows the height of the seat to be adjusted.
– The magazine of the grenade launcher on top of the model can be removed. The magazine part can be attached to either the left or right side of the model.
– The lenses of the headlights and taillights are made of clear plastic. This kit is the first Hexa Gear Booster pack to feature multiple colors of plastic, with black for the main armor, gunmetal for the chassis, gray for the wheels and grenade launcher, and clear, clear red, and clear yellow for the lights.
– The field binoculars included with the kit can actually be held in the hands of a Governor model.
– The tires are made of PVC, giving them a realistic appearance.