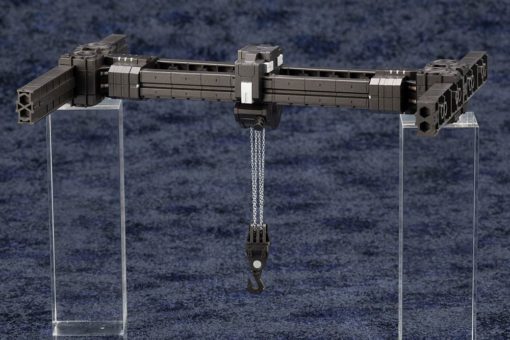 FREE Shipping to the UK
Earn 28 Points with this purchase!
Estimated Release: December 2021.

The long-awaited crane has been added to the Hexa Gear Block Base series.

The long-awaited crane has been added to the Hexa Gear Block Base series.

This set includes the “Crane Unit”, “Girder Unit”, and “Running Rail Unit”.
By combining these units with other separately sold Block Base sets, users can recreate scenarios like Hexa Gear assembly.
Let’s create your own original base or factory!

– The “hoist” of the Crane Unit uses real metal chains, and cargo can be transported up and down using the included rod.
– The Crane Unit can slide horizontally or vertically by attaching to the Girder Unit and Running Rail Unit. Multiple Girder Units and Running Rail Units can be connected together to fit your block base.
– A hook and an eyebolt (a hanging ring) are included to attach items to the crane. The eyebolt is compatible with products that use a 3mm connection joint for users to hang onto the hook and suspend on the crane.
– The Crane Unit can be displayed by itself or as part of heavy machinery using its 3mm connection point.

*This model kit does not include other parts such as panel units. More possibilities are made possible for creating settings if you combine with the DX Head Quarters set, Panel Option A, and/or Lift Option A; all sold separately.