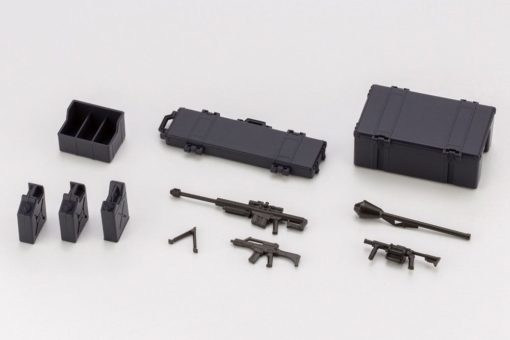 FREE Shipping to the UK
Earn 27 Points with this purchase!
Estimated Release: November 2021.

Kotobukiya is proud to present a set of containers and arms to display with Hexa Gear and Governors.

Kotobukiya is proud to present a set of containers and arms to display with Hexa Gear and Governors.

The main container can be opened and closed to store the included weapons and accessories inside. The same also applies to the rifle case as users can store the included Anti-Material Rifle inside. The two different tanks can be stored inside of the case included with this model. Use the 3mm connection port to attach to other Hexa Gear models sold separately to create different scenarios.

– The main container, case, tank, and tank case color is consistent with the black color used in LORD IMPULSE and BULKARMß “LUMBERJACK”, enabling a wider array of combinations. The coloring of the small arms has also been changed to a gunmetal color.
– The main container can be opened and closed to store the included weapons and accessories inside. Also, by extending the handles on the side, the container can act as a suitcase for ~150mm Frame Arms Girl character models.
– The rifle case can be opened and closed, and the included Anti-Material Rifle can be stored inside.
– The Anti-Material Rifle can be used with or without the bipod to create a variety of different scenarios.
– Two different types of tanks are included and can be stored inside the storage case that can then be suspended by other Hexa Gear models.