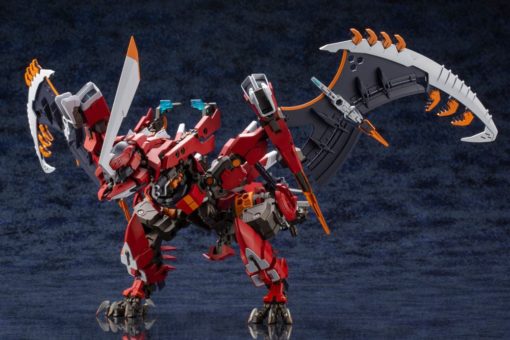 FREE Shipping to the UK
Earn 146 Points with this purchase!
Estimated Release: March 2022.

Agnirage takes the form of a red dragon that serves as the protector of the Valiant Force’s Crystal Reactors.

Agnirage takes the form of a red dragon that serves as the protector of the Valiant Force’s Crystal Reactors.

The model is a third generation Hexa Gear developed independently by SANAT using Zoatex data copied from a stolen Voltrex unit. While the construction of Agnirage’s base frame shares many similarities with Voltrex, the capabilities of the unit have been transfigured to an extent that far surpasses the original Voltrex unit. In addition to flight capabilities that surpass Blockbuster and the defense force field that protects the unit, Agnirage boasts a number of features that distinguish the unit’s prowess on the battlefield compared to the other third generation Hexa Gear. One of Agnirage’s primary weapons is a long-range, chargeable beam known as the “Imperial Flame.” The powerful weapon is used by Agnirage to defend the Crystal Reactors from attackers by burning them to ash by harnessing the “flames of hell.”

Upon sensing enemy forces in its vicinity, Agnirage will immediately take off and fire the Imperial Flame at the enemy attackers from high in the sky. After unleashing total devastation on the enemy targets, which often lack defense from aerial attacks, Agnirage will deploy drones to take out the remaining enemies. In order to accommodate the unit’s inferior armor defense in close-range land battles, Agnirage is equipped with a defense force field, allowing it to stave off attacks from the enemy’s foot soldiers. Agnirage units are typically used individually or in small groups in order to conquer enemy forces over a wide area with rapid precision, and are considered to be one of the biggest threats to the Liberty Alliance along with Para-Pawn Expander.

The exact timeline for the unit’s development is unknown. The unit’s existence was unknown until the initial attacks on the Crystal Reactors, and it is said that the unit already existed at the time of Demolition Brute’s appearance.

As a unit designed to defend some of the most crucial facilities for both armies, SANAT has dedicated its utmost effort to the development of Agnirage and loading the unit with the most advanced technologies. This highly advanced Hexa Gear which takes the form of a gigantic red dragon circles the sky around the Crystal Reactors, unleashing its flame on any enemies that dare to approach and reducing them to ashes.