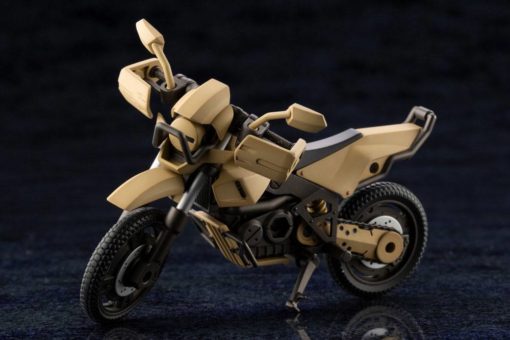 FREE Shipping to the UK
Earn 24 Points with this purchase!

– The second in line for the “Alternative” series is now here. This line aims to create models that are both compact in size, and easy to assemble. This new line can be assembled similar to that of the Governor series, and is made to be easy to build and assemble for model kit beginners.
– The joint units for each part of the frame are equipped with the 5mm HEXA G-R.A.M joints and the 3mm joints, making it easy to change out parts and customize your unit with other Frame Arms Girl, Megami Device, and Modeling Support Goods.
– There are Governor helmet type head parts included, enabling the head part to be assembled on other Governor models.
– This model comes in desert yellow, gunmetal, and black coloration. Desert yellow and gunmetal are the same color as previously released Hexa Gear Booster Pack 003 Desert Buggy.