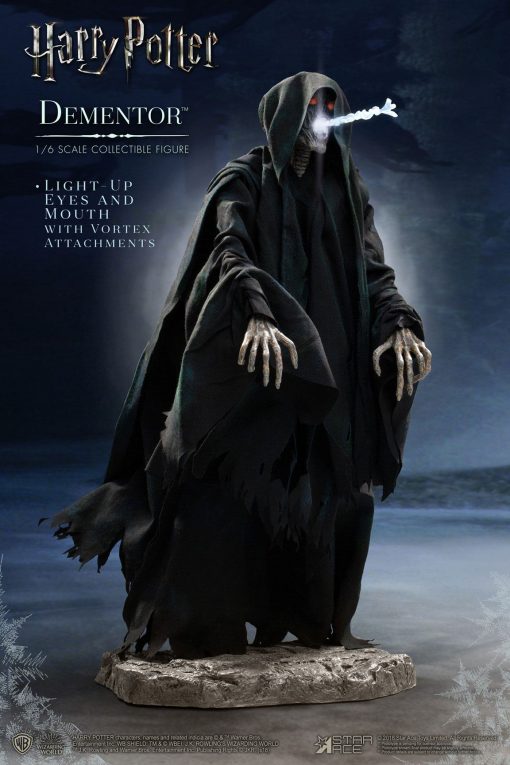 FREE Shipping to the UK
Earn 190 Points with this purchase!

The most terrifying creatures Harry Potter ever encountered were the Dementors, the spectral beings used as guards at the wizard prison, Azkaban. Just being in the presence of a…

The most terrifying creatures Harry Potter ever encountered were the Dementors, the spectral beings used as guards at the wizard prison, Azkaban. Just being in the presence of a Dementor removes all life and joy from their victims, and their most terrifying attack was the Dementor’s Kiss, which sucks the soul from a wizard, leaving them just a mindless husk.

This 1/6th scale Dementor collectible figure features an all-new realistic skeletal likeness with articulated fingers, a weathered black shroud costume and a special attachment to simulate the Dementor’s Kiss. Also included is a stand for displaying the figure in flying poses.

The Deluxe version of the 1/6th Scale Dementor also has illuminated eyes (batteries included), an additional vortex Dementor’s Kiss attachment and a sculpted diorama base.

– 1/6th scale body, approximately 30 cm tall (without feet).
– Authentic likeness of a Dementor from the movie “Harry Potter and the Prisoner of Azkaban.” Head sculpt and skeleton are specially hand-painted.