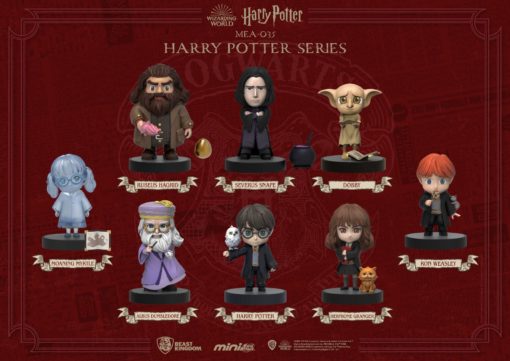 Based on the acclaimed book, Harry Potter and The Philosopher’s stone introduced movie goers to a world of magic unlike anything seen before. As the main setting of the series, The Hogwarts School Of Witchcraft and Wizardry introduced fans to some of the most well-known characters in popular culture.
So strap on to your broomsticks, get your Golden Snitch’s ready and start your very own Harry Potter collection of mini figurines!

Included in the collection:

Harry Potter – The Enigmatic star of the series, with a lightning bolt on his forehead and a drive to be the very best, he is loyal to all his friends, including the adorable snowy owl Hedwig!

Hermione Granger – Born a muggle, she grows up to be a steadfast, strong headed and independent wizard. A problem solver unlike any other.

Ron Weasley – An often shy young wizard, Ron is the heart of the tightknit group of friends!

Severus Snape – An exceptionally skilled wizard, he is a teacher of the ‘Dark Arts’. Often sarcastic and seemingly uncaring, he turns out to be one of the greatest supporters of Harry!

Rubeus Hagrid – A half giant gatekeeper of Hogwarts, he is a warm-hearted, caring character who loves keeping all kinds of rare and exotic animals!

Albus Dumbledore – A professor and headmaster of the Hogwarts school, he is considered by many as the greatest headmaster to ever lead the magical school!

Dobby – A house elf always around to help Harry and his merry gang! With big round eyes and a cute voice, he is never far from the action!

Moaning Myrtle – Originally born a muggle, she is a transparent ghost that roams the corridors of Hogwarts. See through and always in anguish, she longs to be set free!

A full series of 8 designs, using meticulous craftmanship, each figurine looks as though it has popped straight out of the movie and on to your desk.
Now with an upgraded size, the 3-inch figurines are a perfect collection for fans of the magical franchise!