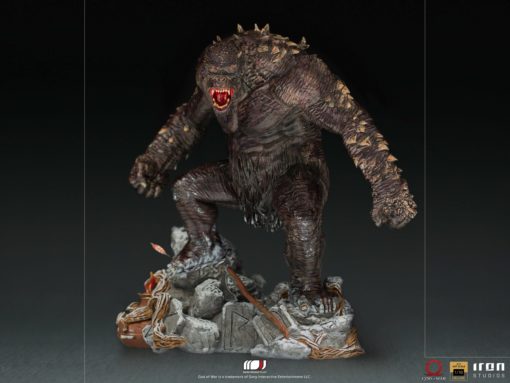 FREE Shipping to the UK
Earn 390 Points with this purchase!
Estimated Release: June 2022.

In the cold mountains of the Scandinavian Peninsula, a gigantic humanoid creature with ape and chelonian characteristics prepares to attack anyone who invades its territory. Fer…

In the cold mountains of the Scandinavian Peninsula, a gigantic humanoid creature with ape and chelonian characteristics prepares to attack anyone who invades its territory. Ferocious by nature, it exposes its fangs by opening its wide mouth and clenching its huge fists, ready to fight.
Its extraordinary strength, along with its thick skin, its back, and arms full of sharp bone plates, make it an even more effective and lethal predator. Thus, Iron Studios presents the statue “Ogre BDS Art Scale 1/10 – God of War”, the monstrous creature, adversary of the Spartan warrior Kratos and his son Atreus. The Ogre is climbing a base full of wreckage from a Nordic ruin with game references. The base is composed of the explosive jar, the arrows of Atreus inserted into it, and Kratos’ magical Leviathan ax, removable for different displays.

The Ogres are one of the most dangerous enemies that Kratos and Atreus encounter on their journey, as they are capable of devastating attacks with their large arms, either directly attacking their opponent or hitting the ground, thus creating seismic shock waves to unbalance their target. They can also jump great distances to attack, however when stunned, they can be grabbed and mounted, and Kratos can then make an enraged Ogre collide with other enemies for a brief moment.

Presented at the Sideshow Con virtual event, Ogre composes a diorama set with the statue “Kratos and Atreus BDS Art Scale 1/10 – God of War”, also in Pre-Order. A must-have for God of Wars fans and collectors, fans of pop culture game icons, and anyone who loves monsters and mythical creatures.

– License: God of War
– Scale: 1/10
– Limited Edition
– Based on original references
– Made in polystone – *(may contain parts in resin, polystone, PVC, metal and fabric)
– Hand Painted