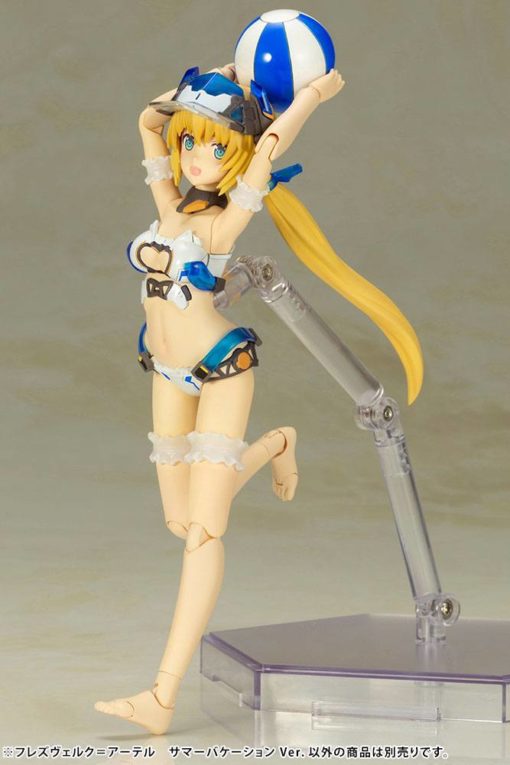 FREE Shipping to the UK
Earn 68 Points with this purchase!

Based on the Frame Arms model designed by Tomotake Kinoshita with character art created by E-ji Komatsu, Frame Arms Girl HRESVELGR is now available in a new Summer Vacation Ver.!

Based on the Frame Arms model designed by Tomotake Kinoshita with character art created by E-ji Komatsu, Frame Arms Girl HRESVELGR is now available in a new Summer Vacation Ver.!

– This Summer Vacation Ver. model comes in a bathing suit.
– A sun visor, beach ball, and sunglasses are included.
– The model kit includes arm and leg parts in both Armed and Unarmed Mode. The upper arm parts in Unarmed Mode is now better balanced than previous arm parts.
– A realistic shoulder/armpit part are included.
– Two flattened chest parts are included in order to customize other Hresvelgr models as well.
– The model kit includes five sets of PVC hand parts.
– The model kit includes four types of face parts (lively/looking forward, looking left, smirking/looking right, and one unprinted face part).
– Customize this model by changing out head parts (head part with sun visor or head part with no head gear) and by adding or removing various parts and accessorites. It is possible to customize this model in over 72 different ways!
– The model kit contains decals for the eyes and other markings.
– With the blade and new assembly parts included in this model, it is possible to change this model into various forms.
– Hip joints that are compatible with 3mm connection points is included.
– The pop-out shoulder joints and the flexible upper arm parts allows this model a wide range of movement.
– The connection shaft for the thighs is a sliding joint, allowing for a wider range of movement.
– The wrists are equipped with ball joints allowing for a wide range of poses and customizations.
– The wrists and its joints are compatible with other models in the Frame Arms Girls series.
– The 3mm attachment points on the arms and legs are compatible with equipment from the M.S.G and Frame Arms series.