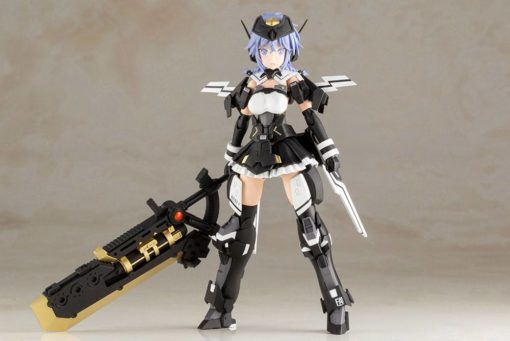 FREE Shipping to the UK
Earn 80 Points with this purchase!
Estimated Release: October 2021.

– 3 different types of newly designed pre-painted face parts are included (front-facing, right-facing, and damaged).
– CHARM Tyrfing is included. Exchange parts to convert the blade part into either a sharp R-shape or a heavy and wide T-shape.
– Based on the design of “FRAME ARMS GIRL GOURAI-KAI Ver.2,” the hip joints, thighs, and skirt are all moveable.
– The thigh armor is connected through double ball joints, giving it a wider range of movement.
– The model includes five sets of updated PVC hand parts with ball joints.
– The kit includes decals for the eyes and other markings.
– The PVC hands are compatible with existing weapons from the M.S.G and Frame Arms series.
– The 3mm attachment points on each part are compatible with equipment from the M.S.G and Frame Arms series.