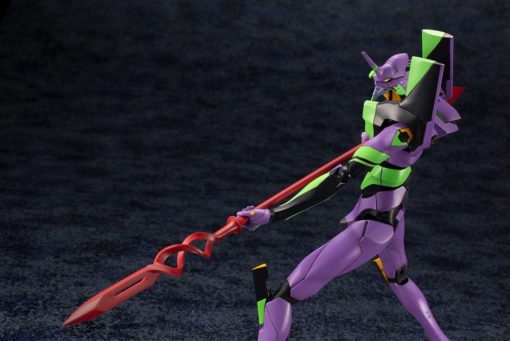 FREE Shipping to the UK
Earn 90 Points with this purchase!
Estimated Release: January 2022.

This model kit features a precise joint design with the use of CAD technology and a sophisticated form created by the hands of highly skilled sculptors to fully recreate the Evangelion and its included accessories, even the spear wielded in battle with Evangelion 13 in the movie trailer.

·Mouth can be opened or closed by adjusting the chin as shown in the film.
·Movable Entry Plug: The Entry Plug can be pulled out in conjunction with the movable rear block.
·Interlocking Knee Joints: The front thighs and kneecaps are interlocked and can be moved.
·Expansion of the shoulder knife storage: can be recreated with additional included parts.
·Interlocking Neck Joints: The throat joint is interlocked enabling the model to look up.

·Some of the parts are pre-painted such as the detailed parts around the head, allowing users to recreate Evangelion Test Type-01 from the film with ease.

This model kit is compatible with the separately sold New Flying Base for users to enjoy posing this model in various action poses. (Can be connected through the 3mm connecting points on the rear and on the Umbilical Cable.)