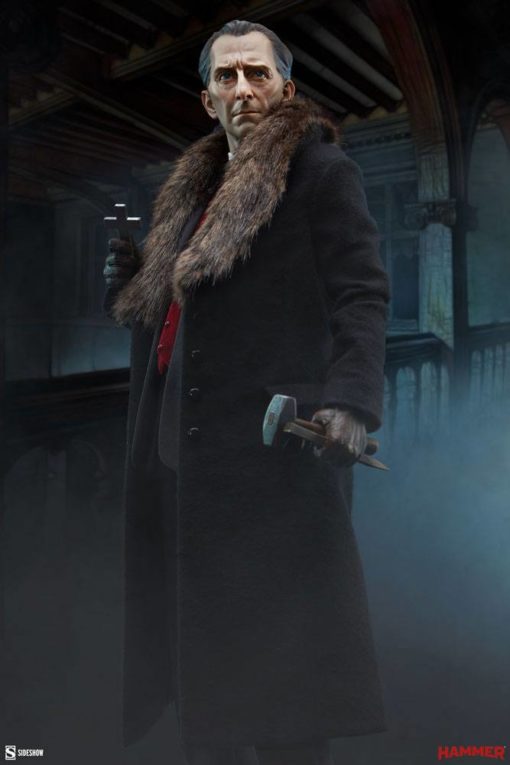 FREE Shipping to the UK
Earn 600 Points with this purchase!
Estimated Release: June 2022.

“… Count Dracula, the propagator of this unspeakable evil, has disappeared. He must be found and destroyed!”

“… Count Dracula, the propagator of this unspeakable evil, has disappeared. He must be found and destroyed!”

The Van Helsing Premium Format measures 21.5″ tall on top of a stone-like base with Gothic gargoyles, creating an air of dread as the famed vampire hunter steadies himself to pursue the fiendish Count Dracula. Sculpted with an incredibly detailed likeness of actor Peter Cushing in the iconic role, this statue captures an expression of fearlessness and resolve, with Cushing’s wide blue eyes, furrowed brows, unmistakable cheekbones, and carefully styled hair.

The Van Helsing Premium Format Figure is a mixed media horror collectible with a fully tailored fabric costume recreating the character’s signature appearance onscreen. He wears a black suit jacket and suit pants along with a red vest, a white collared dress shirt, and a necktie. An elegant faux fur-trimmed coat completes the costume, while his leather-like gloves and black dress shoes are sculpted with realism to complement the fabric elements. Armed with a crucifix in one hand and a hammer and stake in the other, Van Helsing has all the tools of the trade with which to defeat the dreaded vampire.

Hunting for more horror to add to your collection? Enlist the Van Helsing Premium Format Figure in the fight against evil today!