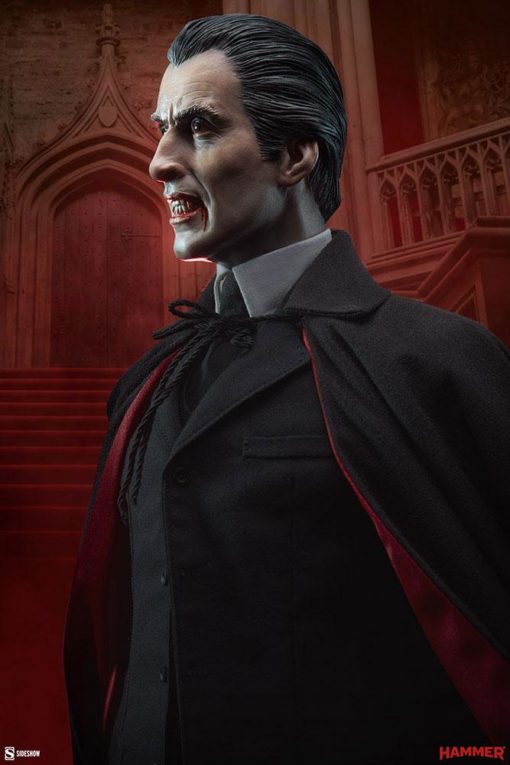 FREE Shipping to the UK
Earn 600 Points with this purchase!
Estimated Release: June 2022.

“You can have no idea what an evil man he is … or of the terrible things he does!”

“You can have no idea what an evil man he is … or of the terrible things he does!”

The Dracula Premium Format Figure measures 22.25″ tall on top of a stone-like base with Gothic gargoyles as the dark and brooding count reveals his horrific visage to the innocents trapped in his castle. Sculpted with an incredibly detailed likeness of actor Christopher Lee as the iconic monster, this statue features the bloodshot eyes and shining fangs that forever changed pop culture’s image of the vampire. A meticulous paint application around the mouth captures the look of freshly spilled blood, and his heavy brows and slicked back hair complete the haunting portrait fans instantly recognize as the feared Count Dracula.

The Dracula Premium Format Figure is a mixed media horror collectible with a fully tailored fabric costume recreating the count’s iconic appearance onscreen. He wears a detailed black suit jacket, pants, and a white collared dress shirt with a necktie. His suave ensemble is finished with a black cloak with a striking red inner lining. The vampire also has sculpted dress shoes and a signet ring on his left hand, which is outstretched to flourish his cape as he makes his bloodthirsty approach.

Stake a spot out in your collection and bring home the Dracula Premium Format Figure today!