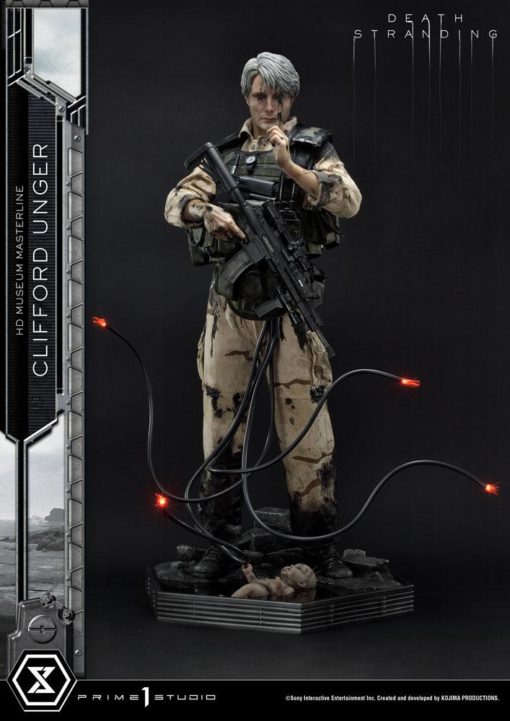 FREE Shipping to the UK
Earn 3,400 Points with this purchase!
Estimated Release: December 2022.

Prime 1 Studio is immensely excited to announce the next addition to the High-Definition Museum Masterline Series: The incredible 1/2 Scale Clifford Unger (Combat Veteran) from …

Prime 1 Studio is immensely excited to announce the next addition to the High-Definition Museum Masterline Series: The incredible 1/2 Scale Clifford Unger (Combat Veteran) from the hit game, Death Stranding!

Prime 1 Studio presents the enigmatic Combat Veteran aka Cliff Unger at an eye-opening 40 inches tall. Played by the magnificent Mads Mikkelsen, who won Best Performance at The Game Awards 2019, Cliff represents an integral part of Sam Porter Bridge’s journey to becoming the savior of humanity.

Our highly-trained sculptors and painters have done an impeccable job of capturing Mads Mikkelsen sporting his most compelling gaze. The talented artists at Prime 1 Studio have also equipped Cliff with poseable, LED illuminated tendrils which glow with supernatural life, having just released the soldiers they were attached to. Cliff’s fabric camos and vest are as close-to-real, as every stitch and button has been tailored to scaled perfection. Prime 1 Studio completes Cliff’s look with his Wellmax Assault Rifle, as well as various other details from the game. Standing in the tar-drenched sewers of the World War II Boss fight, Cliff is ready to command his skeletal forces to get his BB back from Sam.

Celebrate the amazing world of Death Stranding by collecting this breathtaking statue today!