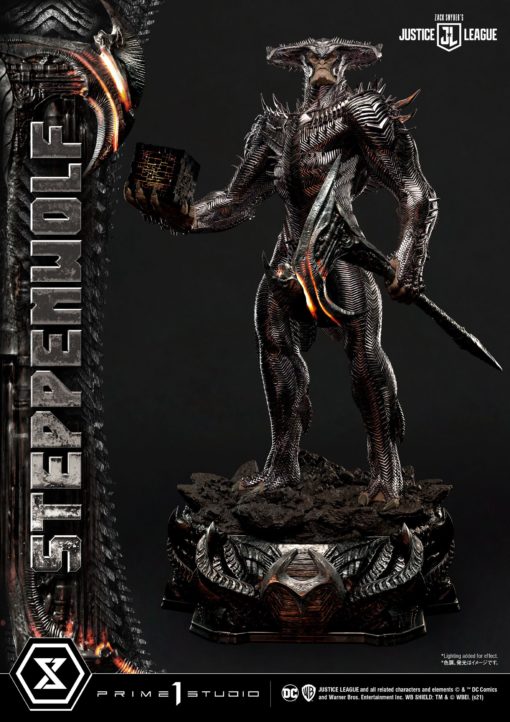 FREE Shipping to the UK
Earn 1,800 Points with this purchase!
Estimated Release: March 2023.

“No protectors here. No Lanterns. No Kryptonian. This world will fall, like all the others.”

“No protectors here. No Lanterns. No Kryptonian. This world will fall, like all the others.”

Prime 1 Studio is proud to offer the General of Apokolips in the Museum Masterline DC Theatrical Series: The 1/3 Scale Steppenwolf from Zack Snyder’s Justice League!

2021’s Justice League, Zack Snyder’s magnum opus for the illustrious DC pantheon, brings us a new version of the story, and with it, a well-deserved overhaul of Steppenwolf! Ready to take on Earth’s forces at over 40 inches tall on his scorched-earth base, Steppenwolf sizes up the folly of the resistance.

With the Snyder cut of Justice League, Steppenwolf not only received a fuller backstory complete with pathos and motivation; he also received a gleaming renovation. Sculpting all the intricate detail of this magnificent costume was no easy feat, but Prime 1 Studio was up to the herculean task. Not only that, we made sure to paint this statue in a faithful rendering of the glossiest, shiniest metal paint as to accentuate his new costume from every angle. He may be a bad guy, but he really doesn’t have a bad side, so to speak!

To make Steppenwolf even more menacing, we have equipped his left hand with an Apokoliptan axe imbued with New Gods tech and magic! And in his right hand, Steppenwolf clutches the legendary Mother Box.

Steppenwolf stands his ground on a scorched Earth base reminiscent of his first landing on Earth, when he fights the Amazons to their deaths. His symbol adorns the front of his base, as Apokoliptan tech wraps around it to show his origins, the planet he longs to return to.

So what are you waiting for? Bring Steppenwolf home, the NEW Steppenwolf, to your Justice League film statue collection today!