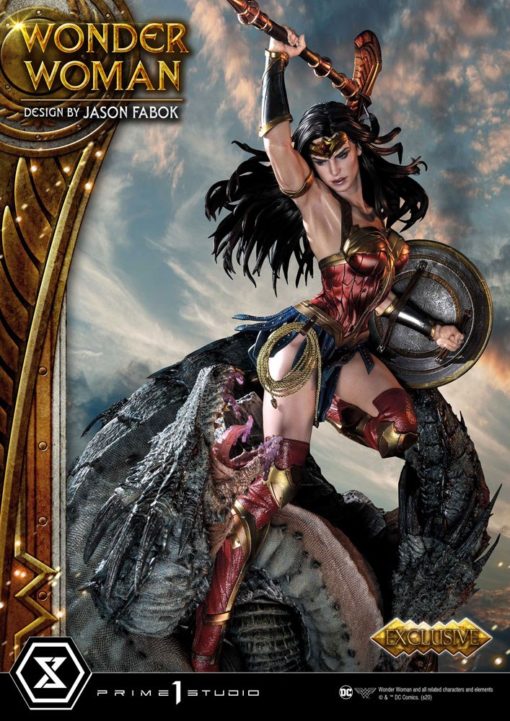 “I am left to find my own methods for killing this thing.”

“I am left to find my own methods for killing this thing.”

The daughter of the mighty Olympian God Zeus and the Queen of the Amazons, Hippolyta, Princess Diana of Themyscira is the embodiment of power and heroism. She possesses superhuman strength, speed, advanced hand-to-hand combat, and is proficient with nearly every weapon ever made, including her very own Lasso of Truth.

Wonder Woman is locked into battle with the Three-Headed Hydra. She is in a dynamic attack pose, weapon in hand, armor beautifully glistening, with an extremely focused, determined look on her face. Her hair is flowing in the wind as she is locked in to strike the insanely detailed Three-Headed Hydra. The Hydra has already felt Diana’s blade once and has some noticeable battle damage. Its open mouth is leaking with venom, and its eyes are poised on Wonder Woman, you can feel the tension through the statue!

Through close collaboration with Jason Fabok, we have created the ultimate Wonder Woman statue in her dynamic pose. Wonder Woman’s armor has been beautifully crafted with wings and feather motif. The Hydras have been sculpted in such a detailed way that you will not want to take your eyes off them! There is blood around the entire statue, adding to the atmosphere and showing you not to mess with Wonder Woman! These elements have been merged into a fully immersive piece that fully portrays Wonder Woman as the Heroine she is.

Do not miss out on adding this godly masterpiece to your collection!