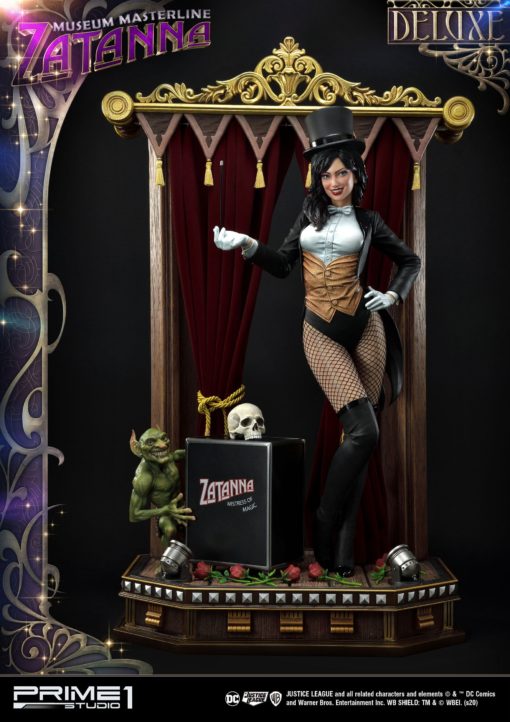 FREE Shipping to the UK
Earn 1,726 Points with this purchase!
Estimated Release: May 2022.

Prime 1 Studio is proud to present the latest addition to the timeless Museum Masterline Series! The Mistress of Magic herself, 1/3 Scale MMDC-44DX: Zatanna Deluxe Version from …

Prime 1 Studio is proud to present the latest addition to the timeless Museum Masterline Series! The Mistress of Magic herself, 1/3 Scale MMDC-44DX: Zatanna Deluxe Version from the Justice League Dark!

Zatanna Zatara is a professional stage magician who shares the same abilities as her father, making her both a stage musician and one who is adept in the actual magical arts. She is one of the most powerful Homo-magis in the entire DC universe and uses her supernatural abilities to fight the Dark arts alongside the powerful Justice League Dark.

Let’s take the stage with Zatanna! She stands 29 inches tall in a gorgeous museum pose upon the ultimate stage-themed base. She is wearing her classic stage outfit complete with real fishnet stockings. Guaranteed to not only steal the show but steal your heart as well! The Deluxe version features three right hand switch-outs and three possible portraits, allowing you to display Zatanna to your liking! Will she be pulling the Possessed Rabbit out of the hat, or casting a spell? “Eht eciohc si srouy!”

You will not be able to stop looking at it! This Deluxe version base is the ultimate way to display Zatanna! It features a sleek designed “Mistress of Magic” prop box, a skull, the green troll reminiscent of the classic cover art, and many roses lining the floor fully complimenting the presence of Zatanna! We have carefully chosen all the elements of this statue down to the smallest detail in concept and design to bring you the best Zatanna on the market! A must have for DC/Zatanna fans everywhere and the next centerpiece in your collection!