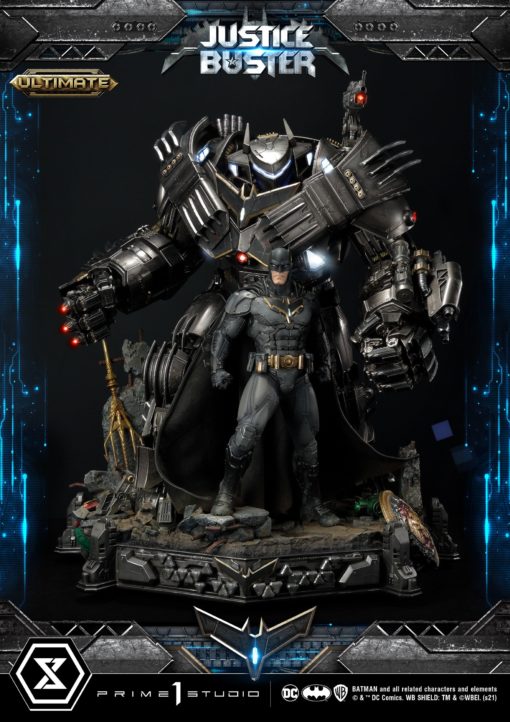 FREE Shipping to the UK
Earn 3,620 Points with this purchase!
Estimated Release: September 2022.

Straight from the pages of Batman: Endgame No.1, The Joker has infected the rest of the Justice League, and his one command is for them to take out The Batman!

Batman has always had contingencies planned for when he believes his fellow Justice Leaguers might go rogue, but the Justice Buster has been created and designed for when they go rogue ALL AT ONCE!

This overwhelming masterpiece stands at a jaw-dropping 35 inches tall, fully loaded with all the defensive and offensive capabilities for situations that Batman has planned for: Anti-Superman Knuckle Dusters made with Miniature Red Suns, an Autonomous Anti-Flash Turret, and a Citrine Neurolizer for Green Lantern are only some of the amazing weaponry this technological wonder holds.

The Justice Buster statue has been carefully outfitted with impressive features that take inspiration from the landmark storyline; and Josh Nizzi improves on every minute detail. Numerous levels of paint applications, weathering and washes, strategically placed LED lighting, and an imposing pose set this apart from any other statue in your arsenal! Swap out the Justice Buster helmet with Batman’s head to tell a different story. This Justice Buster comes with both open and closed Chest and Back Wing parts for display flexibility.

Set in a lavishly decorated base that illustrates just how unwinnable tangling with Batman can be, The Justice Buster strides through to victory and into your collection like no other!

A must-have for Batman and Justice League fans everywhere!