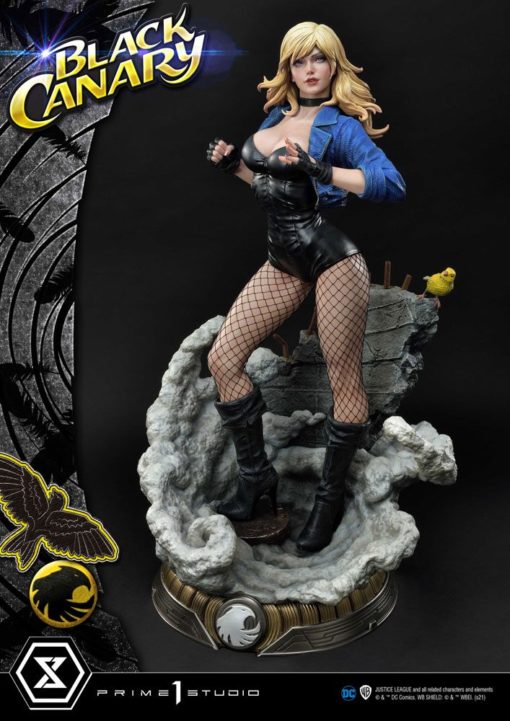 FREE Shipping to the UK
Earn 1,360 Points with this purchase!
Estimated Release: October 2022.

Prime 1 Studio is proud to present the latest addition to the Museum Masterline Series:

Prime 1 Studio is proud to present the latest addition to the Museum Masterline Series:
The 1/3 Scale MMDC-49: Black Canary from DC Comics!

Dinah Laurel Lance is a born and bred crimefighter. At an early age, she embarked on a rigorous training program, following in her mother’s footsteps to become the new Black Canary. Black Canary is a prodigious hand-to-hand combatant and prolific martial artist who has gone toe-to-toe with the Batman. However, her ace-in-the-hole is her metahuman ultrasonic attack: The Canary Cry, which deals tremendous damage to anyone who hears it!

Our powerful Black Canary statue stands ready for a fight at 27 inches tall. Her portrait has been sculpted with the highest attention to detail, creating a focal point that is impossible to resist. Black Canary dons her classic costume complete with her denim jacket and leather bodysuit, both texturally sculpted to be as faithful to the materials as possible. The statue features real fishnet stockings which add stunning realism to the piece.

Black Canary comes with a compact, themed base (complete with an admiring canary) which serves as a fitting pedestal honoring her street-level superhero history. Choose any of the four (4) swappable left hands to change the energy of the action!

We at Prime 1 Studio have worked very hard to make this the most eye-catching DC Superhero to date! This gorgeous and commanding statue is a must-have for Black Canary fans everywhere!