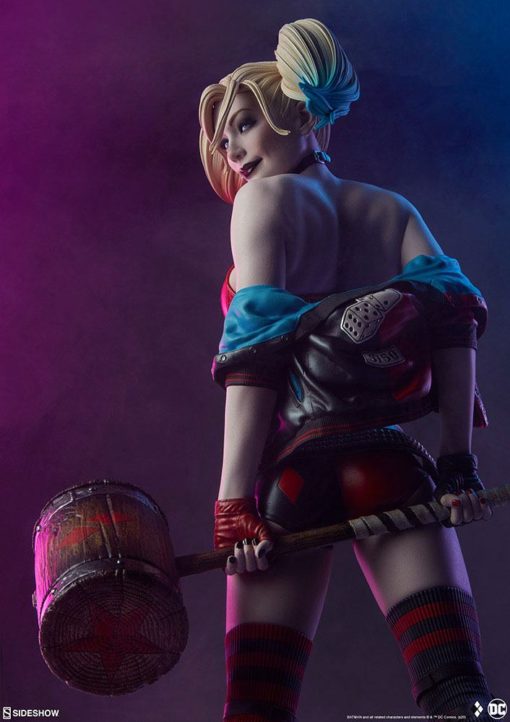 FREE Shipping to the UK
Earn 620 Points with this purchase!

You’ve heard of a derby jammer- now get ready for a derby HAMMER! The Harley Quinn: Hell on Wheels Premium Format™ Figure measures 20″ tall as Gotham’s maid of mischief skates her way around a neon-themed rink base, ready to take a swing at any chuckleheads who get in her way.

The polyresin Harley Quinn: Hell on Wheels Premium Format™ Figure features a fully sculpted red and black costume inspired by her modern comic book appearance, with a bustier, shorts, socks, and skates all accented with stars and diamond shapes. Her unmasked portrait features dip-dyed red and blue pigtails pulled away from her face as she gazes coyly over her shoulder, shrugging off a jacket with “5150” and a pair of dice emblazoned on the back. Harley Quinn’s look is perfectly coordinated right down to the delicate manicure on her fingertips, and she’s ready for a bout of fun and mischief.

She’ll drive you to the rink of insanity! Bring home the Harley Quinn: Hell on Wheels Premium Format™ Figure today.