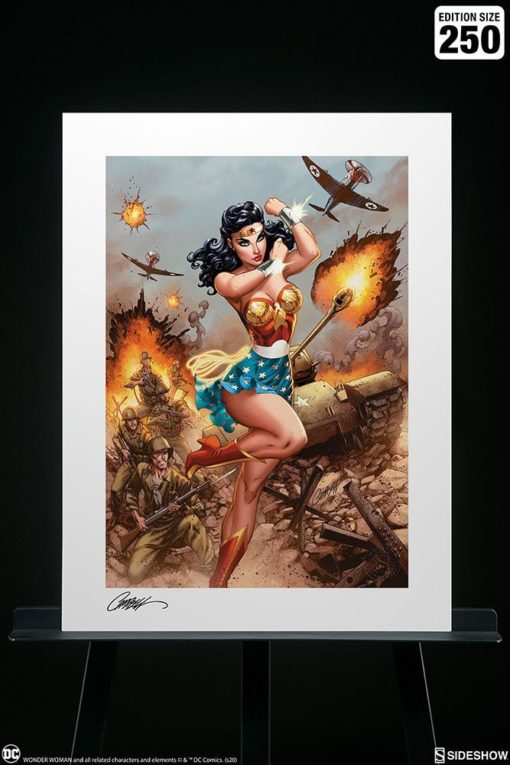 FREE Shipping to the UK
Earn 133 Points with this purchase!

Fan-favorite comic artist J. Scott Campbell pays tribute to a classic era of one of the most iconic superheroes of all! In this dazzling illustration, Diana of Themyscira leaps into action on the explosive battlefield of the second World War, fighting to protect the world of mankind. Her golden lasso and silver bracelets glisten as she fearlessly leads the charge, flanked by allied troops. Dressed in her classic starry blue, white, red, and gold costume, this timeless depiction of Wonder Woman is sure to stand out in any DC Comics collection.

Originally created as a variant cover for the milestone issue Wonder Woman #750 (2019), written and drawn by dozens of creative teams for DC Comics, this dazzling comic book collectible artwork is available for fans in a fine art format. Each Wonder Woman #750: WWII Fine Art Print is hand-signed by J. Scott Campbell and features an embossed Seal of Authenticity as a part of the limited edition of 250 pieces.

Rally behind the pride of the Amazons and bring home the Wonder Woman #750: WWII Fine Art Print by J. Scott Campbell today!