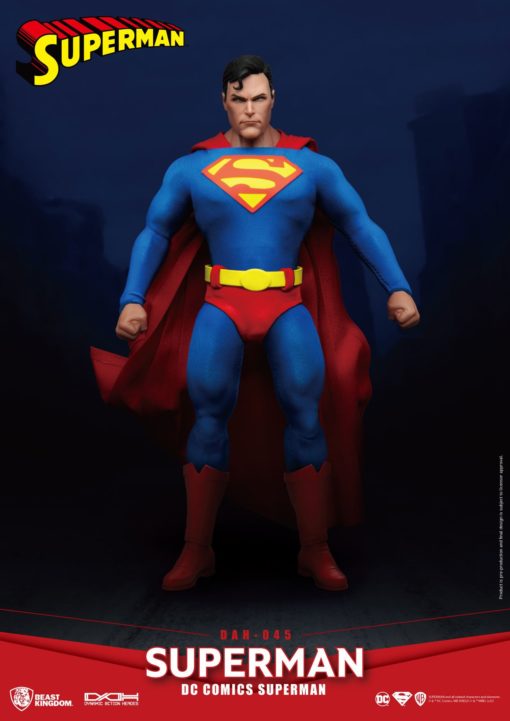 Of all the superheroes brought to life in the golden era of comics, Superman stands as the champion of all that is just and true. An alien from the planet Krypton stranded in Kansas city, he grows up to be a hero for all the human race, ”faster than a speeding bullet, and more powerful than a locomotive”!

First appearing in the 1938 issue of Action Comics, Superman has grown to be a global phenomenon, spawning movies, animated series, comics and cross-overs the likes of which are legendary!
With his classic red, yellow and blue costume, and his search for justice, Superman is and will be one of the most beloved characters in comic history!

Beast Kingdom’s ‘Entertainment Experience Brand’ takes fans of the Man Of Steel back to his roots with a classic rendition of the Superman design! The DAH-045 DC Comics Superman brings to life the muscular, heroic and brave figure as a highly articulable collectors piece. Standing tall at 20.5cm in height, the figure is clothed using real, detailed fabric, befitting the bulletproof hero!
The classic costume is also matched with a pair of highly detailed head sculpts, one with a classic heroic look, and the other of Superman in ‘anger’ mode. The ‘angry’ sculpt includes light-up LED’s with heat vision special effects to really showcase Superman at his most furious state!
For fans of the classic superhero with his original suit, this is one set not to be missed!