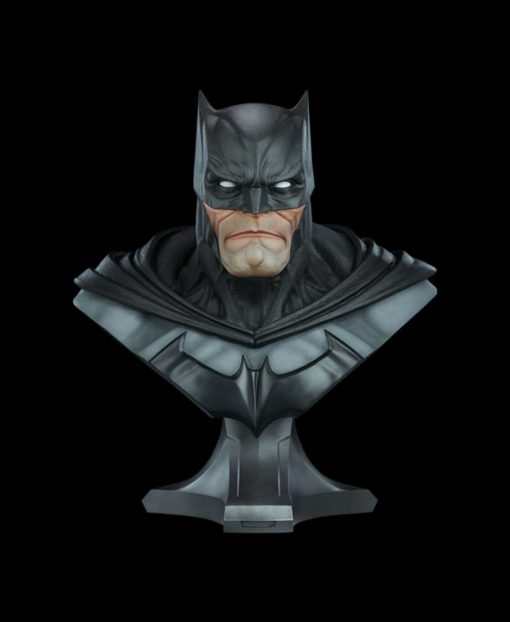 FREE Shipping to the UK
Earn 1,100 Points with this purchase!

Sideshow presents the Batman Life-Size Bust, bringing the grit of Gotham City to your collection in epic 1:1 scale.

Sideshow presents the Batman Life-Size Bust, bringing the grit of Gotham City to your collection in epic 1:1 scale.

The Batman Life-Size Bust measures 26.5″ tall and brings you face to face with the Dark Knight himself. Inspired by his appearance throughout DC Comics, this fiberglass bust has been designed with great detail to bring Batman’s iconic cowled portrait to life on top of a sleek grey base.

The Batman Life-Size Bust is fully sculpted and features Batman’s point-eared cowl with striking white eyes, along with the scowling face of Bruce Wayne beneath the mask. From the chest up, this intricately sculpted DC Comics collectible includes varying lifelike textures on the grey suit, black cape, cowl, and even the facial details on his gruff portrait. Batman’s iconic symbol is incorporated into the lower design of the bust, making the Dark Knight an intimidating addition to any collection.

Step from the shadows and add the Batman Life-Size Bust to your batcave of DC Comics collectibles today!