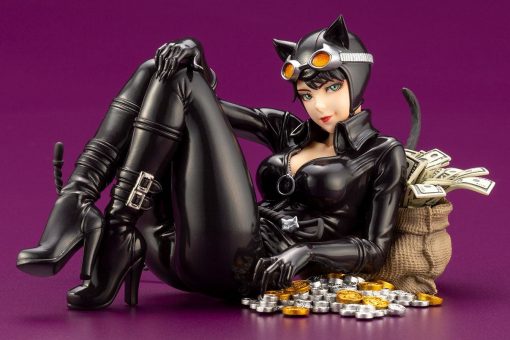 FREE Shipping to the UK
Earn 120 Points with this purchase!

Batman’s fateful rival and love interest, Catwoman is making her return to the BISHOUJO series with brand new art by Shunya Yamashita!

Batman’s fateful rival and love interest, Catwoman is making her return to the BISHOUJO series with brand new art by Shunya Yamashita!

Catwoman rests against a burlap sack stuffed with cash, with a satisfied smile on her face that is sure to steal your heart! The statue is packed with exciting details that give the piece a unique sense of atmosphere, from Catwoman’s signature whip that playfully resembles a cat’s tail, to the actual kitten’s tail peeking out from Catwoman’s stash.

The details in the statue’s sculpting as well as the variety of textures and painting give this BISHOUJO a unique appearance that is sure to win its way into your heart and your collection!