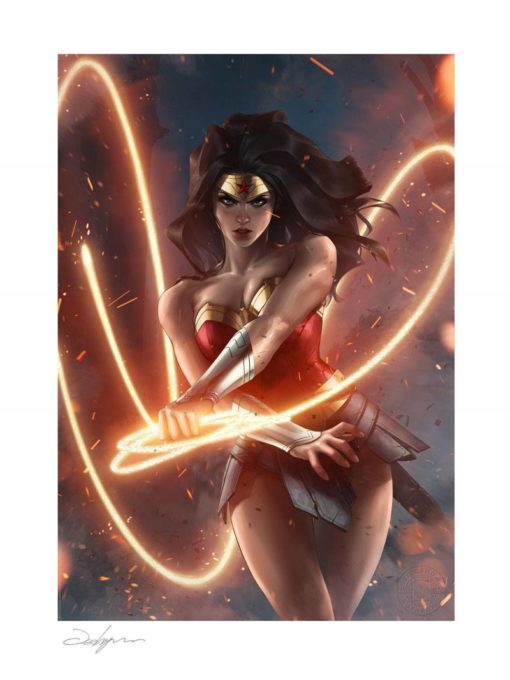 “You said my lasso isn’t a weapon, but when one is entwined in it, they speak the truth. And that- the truth- is my weapon.”

“You said my lasso isn’t a weapon, but when one is entwined in it, they speak the truth. And that- the truth- is my weapon.”

The strength of the Amazons lives in her! In this dynamic portrait, Princess Diana of Themyscira wields her Lasso of Truth with incredible speed and skill. Bathed in its golden glow, Wonder Woman is focused on the fight ahead while the battlefield burns around her. Sparks and embers fly in the wake of her lariat’s path as she protects the world of mankind from dangers untold.

Originally created as a variant cover for Dark Nights Death Metal #1 (2020), written by Scott Snyder for DC Comics, this comic book artwork is now available for fans in a fine art collectible format. Each Wonder Woman Fine Art Print features an authorized, automated artist signature and an embossed Seal of Authenticity as a part of the limited edition of 375 pieces.

Use your warrior might and make sure to bring home the Wonder Woman Fine Art Print by Jeehyung Lee for your DC Comics collection today!