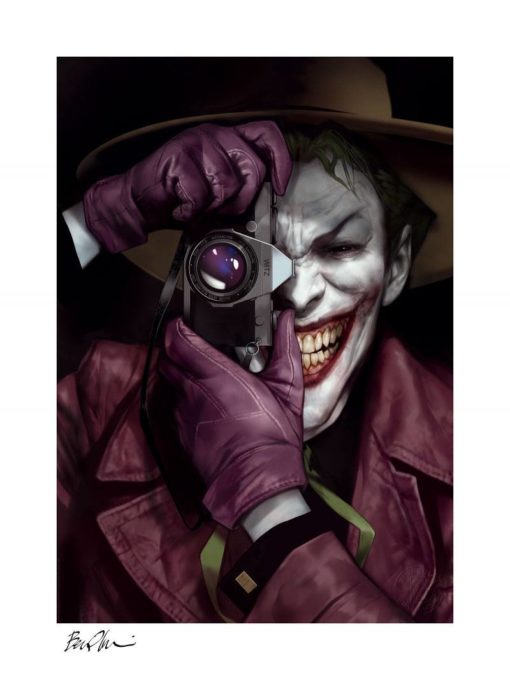 FREE Shipping to the UK
Earn 126 Points with this purchase!
Estimated Release: September 2021.

“Why can’t you see the funny side? Why aren’t you laughing?”

“Why can’t you see the funny side? Why aren’t you laughing?”

Look into the lens of the maddest man in Gotham with artist Ben Oliver’s bold tribute to Brian Bolland’s iconic cover to The Killing Joke, the 1988 graphic novel that redefined everything fans knew about The Joker. Dressed in his touristy best, the jester of genocide himself smiles behind the camera, creating a terrifying snapshot of Batman’s most dangerously insane foe. The haunting illustration also features several Easter eggs from the original comic cover, including the words ‘witz’, ‘witzmacher’, and ‘kawalarz’ hidden around the lens of his camera, signifying jokes and pranksters in German and Polish. Two versions of the “Oliver after Bolland” signature are also concealed in the composition, on the camera and on The Joker’s cufflink.

Each The Killing Joke Fine Art Print features an authorized, automated artist signature and an embossed Seal of Authenticity as a part of the limited edition of 600 pieces. All it takes is one bad day to miss out on this limited-edition print- so don’t delay! This DC Comics fine art collectible is an essential addition to any Batman or The Joker-based collection.

Smile for the camera and snap up The Killing Joke Fine Art Print by Ben Oliver for your home display today.